We have a new word for:

Chipkaofication (noun): The act of making certain investors buy at inflated prices after which the stock price falls big time.

“Chipkao” is a hindi word that means “to paste something with glue”.

But in colloquial terms, this concept is to give something to someone that isn’t necessarily nice, and then they’re “stuck” with it.

Now consider a stock called JP Associates. They are a big company. At end Jun 2014, they had about 220 cr. shares outstanding. The stock was at Rs. 80 then so the company’s market cap was nearly 20,000 cr.

Then they had a Qualified Institutional Placement (QIP) for Rs. 1500 cr. at Rs. 70.27 per share. This added 21.33 cr. shares (effectively a 10% dilution). Supposedly, those who bought were qualified institutions.

At the same time promoters sold shares in the open market. And then, after the QIP, the stock started to fall, and continued its downward trend. 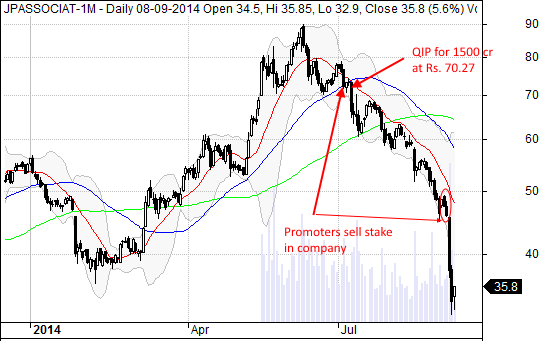 Even September, promoters sold on three consecutive days before the stock just went to hell.

Here are the promoter sales, revealed to the stock exchanges:

Promoters of course are saying that they sold insignificant quantities (only about Rs. 180 cr. after all, which is next to nothing). This will meet their requirement of funds including for “social cause”.

Who are the QIP Investors?

All fairly big names it turns out. (Source: BSE) 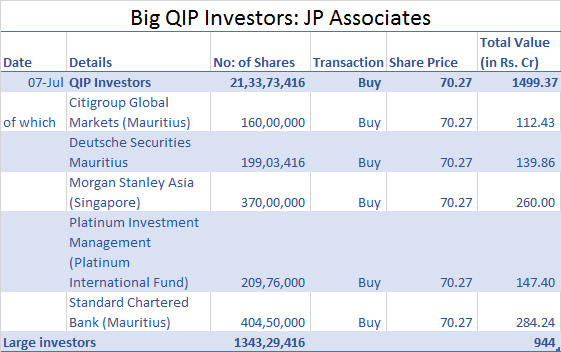 It’s obvious that some of these large investors with very trustworthy names are holding stock that has fallen tremendously in value.

The rise in the stock to the Rs. 90 level, a QIP and a sudden retreat to the 34 level sounds a little difficult to believe as “fundamental”. It’s almost as if the stock magically went up, the QIP investors bought at the high values, and then the stock went back to being in the doldrums. It wouldn’t be out of line to believe that these QIP investors were “chipkaoed” with these shares.

Of course, in the meantime, the company has sold a lot of assets to pare its large debt. But still, the fall has been quick and during a time when market indexes have hit new highs – can you imagine a large stock falling 50% while the index went up 10%?

And if, meanwhile, promoters sell part of their holding, you kinda start looking for the word “loser” written on your forehead.

There’s nothing illegal about this concept – of course you want to sell stocks at high levels, and if your stock is at a high enough level, you might as well get investors to buy at those prices. But when these things happen you wonder if QIP investors will ever believe Indian promoters any longer.

And Another One: C Mahendra Exports Turns out Bennett got in at the worst time possible, after the share had run up nearly 3x over the previous year. And then, boom. Looks like Chipkaofication, no?

Any others you know about?