The VIX has touched close to an all time low at 13.07, and at this point options aren’t just cheap, they’re the cheapest they’ve ever been.

Since the Vix is really the implied volatility of the oncoming month’s options, if we plot the VIX with the actual one month move after the date, we might see if the “low” VIX is tradable. A VIX of 13 or so probably expects the index to move about 3% in the coming month. To give you an example, today:

So technically a low Vix (15 or below) means that 3-4% moves are probably acceptable, but anything more should give a straddle buyer a profit. 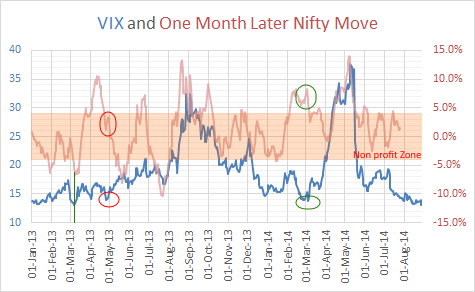 I’ve shaded the “non profitable” zone of +4% to -4%. If a one month move lies within that range it’s not all that great for an option buyer.

There are other smaller data points out there, but I think there’s no clear trade this way or that.

But of course these are too few data points, so let’s take a longer term look. It’s a little too early to say this but we are probably going to see some volatility in September. But will it be enough to cover a 240 move in either direction?