From Jun 2014, RBI has sold about 150,000 cr. of government bonds it holds, and has instead replaced them with dollars. 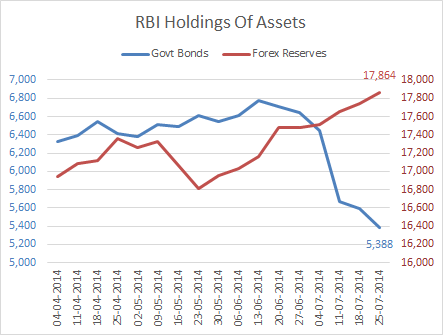 (This is a split graph, with Govt Bonds on the left axis and Forex reserves on the right axis)

You will find that from mid-may – in fact, after election results, the RBI has puchased about Rs. 2 trillion worth of dollars. (200,000 cr. of dollars)

Our guess is that it is to contain inflation. When the RBI prints to buy dollars, it increases money supply. Money supply expansion causes inflation in the longer term.

In the past we never bothered about that. When we bought dollars like crazy, we continued to buy government bonds as well. “We” because the RBI balance sheet is effectively the monetary balance sheet of the Indian public.

This expanded money supply like crazy. We first saw a mad 20% money supply expansion in 2001 to 2008. Most of this was because of an increase in dollar reserves. The holding of rupee bonds didn’t increase that much. 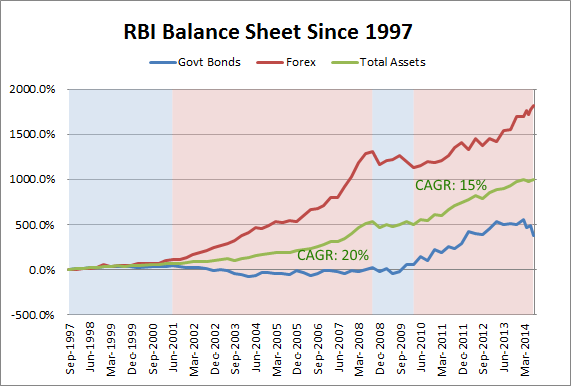 We’ve also seen a crazy 15% expansion in the RBI balance sheet between 2010 and 2014.But this time, it’s been because of a crazy increase in BOTH areas – rupee bonds and dollars.

This year, though, since April, the RBI has been selling bonds in the open market, while adding dollars. This has reduced the expansion of the balance sheet somewhat, though it still remains expansionary. 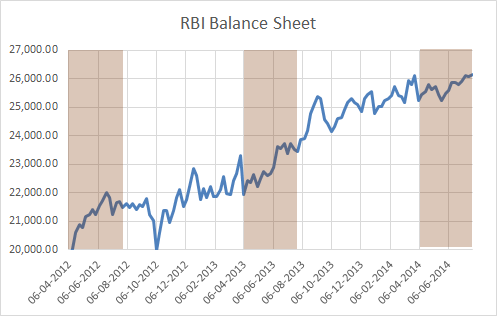 This, we think, is a good thing because it cuts monetary inflation, but they have to be more aggressive about selling bonds. Some of the bond sales in April and May were “automatic”; when the government had to pay up for maturity of bonds that added up to 75,000 cr. or more in April and May, RBI owned a good number of those bonds and effectively they sold those bonds.

But since June, the bond maturity amounts are miniscule, so RBI would have actually sold bonds in the open market.

(When the RBI prints rupees to buy dollars, it expands money supply. When it sells government bonds, the rupees it gets in return will go out of circulation. That contracts money supply).

This is an interesting macro-development. Because till now, FIIs were buying rupee bonds. And bringing in dollars. RBI built reserves. For the last few days they have been buying dollars and taking them out, while selling rupee bonds.