RBI buys the dollar yet again in June, even as the rupee lost value. This time, in the futures market, with another massive $11.3 billion purchase, added to a $597 mn purchase in the spot market. 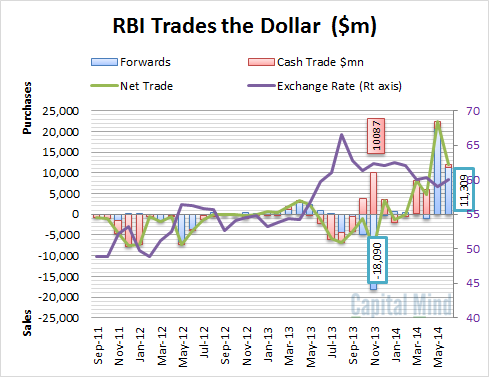 This forward purchase is probably to negate the forward exposure created in Nov 2013 which is due to the repayment (in 2016) of the NRI FCNR Deposits guaranteed by the RBI.

Even then note that the rupee fell in Jun 2014, from Rs. 59 to Rs. 60 to a dollar. When the rupee depreciates you would expect the RBI to buy the rupee (and sell dollar) if it were really looking at “stability”. At the very least, you don’t expect it to buy dollars. But we went and bought $11.8 billion, the second highest in five years. (And the highest was just a month back!)

You can see now that the forex exposure in forwards has become near zero: 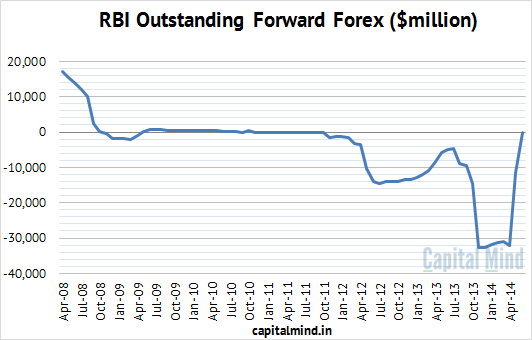 And on a cumulative basis, we have bridged the gap. Since 2005 we have effectively bought $71 billion. 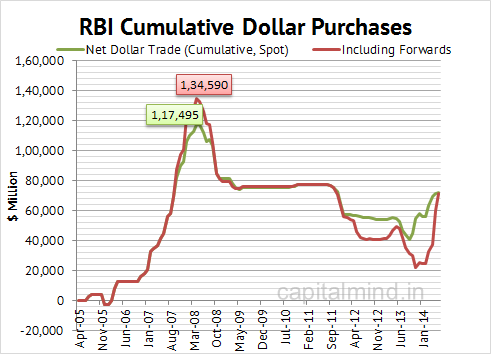 While the RBI report says that it effectively bought $10.8 billion for the year, the calculations don’t add up. (It should be the sum of the net buys in previous months). So I’m going to assume there’s a typo in the RBI bulletin.

Even then this is the second biggest year for RBI’s forex purchases since 2008 and the second highest ever. (Including forwards) 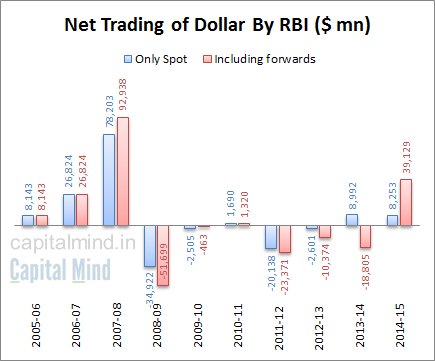 Is this a Good Thing or a Mess?

Buying in the forward market is fine today, because you don’t have to print rupees. We don’t currently know if the forward purchases mature when the current sell obligations do (i.e. November 2016). If they do, then this transaction is fine. But what if they mature earlier?

A maturity mismatch is a concern if at the time one set of transactions mature, we have a money supply issue (RBI will print rupees to buy the dollars for example) which is disruptive.

It could also be that RBI plans to “roll over” such transactions till the November 2016 date, in which case it would be a good thing – then, forex supplies will not be heavily impacted.

While RBI has been buying forex in the spot market, it has been correspondingly selling rupee bonds. This is a good thing because it effectively sterilizes the rupees printed for buying forex (since the rupees come back to the RBI when it sells the bonds it holds).

The RBI is likely getting ready for the end of US QE3, which means the “taper” will take us to the end of the US Fed buying treasuries and securities by printing money. This is likely in 2014, but it’s not yet apparent there could be a problem. But obviously the RBI knows more than us – and is likely to have built their dollar warchest just in case.