Club Mahindra has offered rooms to non-members while members were refused, it turns out, as a State Consumer Forum orders them to pay back all money received plus 12% per annum, totally 3.5 lakh rupees, to a couple in Mumbai. (HT Manoj Nagpal)

Ritu and Navdeep Uppal bought a Red membership to Club Mahindra for Rs. 1.92 lakh in 2006, the highest membership level at the time. This should have, in their opinion, given them access to any Club Mahindra resort at any time, if it was available.

They soon found out that it was never available for them. They tried from 2006 to 2009, to book rooms – remember, they get a week a year – but nothing was available for them when they wanted it. They paid the Annual Maintenance Charges of about Rs. 7K a year for four years, taking their total payment to Rs. 2.21 lakh.

In October 2009, they wanted to book the Goa Varca resort and were told that the hotel, for their dates – for December 2009 – wasn’t available. And that they could go to a new resort called “Goa Jasmine” instead.

So the Uppals decided to test this “not available” theory, and requested a booking for the Varca resort as a non-member, via the internet. Apparently, the resort WAS available for a fee.

Then the Uppals went to consumer court. After getting rejected at the district level, they went to the State Commission to appeal. (See District Level rejection – in Marathi only )

Club Mahindra tried evasive tactics to defend their action, but did not provide a list of bookings for those dates so they could prove the resort was booked before the Uppals tried.

The State Commission thus found Club Mahindra guilty for having breached the contract, and have told them to pay :

Our view: We’ve maintained that Club Mahindra has never had enough rooms to satisfy all its members, even if they wanted holidays spread proportionately during the year. It was obvious from the IPO itself. It still is the case. 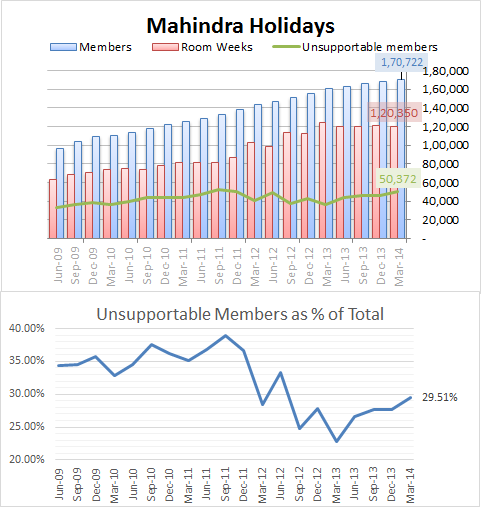 We would encourage more such dissatisfied members to go to consumer courts and demand full compensation if they unable to get a resort; importantly, please ask for a list of current bookings in case you are refused, and even attempt booking through an internet site (directly or through an agent) so you can prove deficiency in service.

In their Q1 2015 presentation, their “room” revenue (as against subscriptions) has gone up 62% from last year and they have again started marketing rooms to non-members. So we’re likely to see many more such cases going forward, I think.