Following up on our post on banks’ NIMs, let’s take a closer look at their NPAs (non-performing assets), both Gross NPAs and Net NPAs, over the last quarter. There are 31 banks that had released their results for Q1 2015.

Gross NPA ratio is calculated as gross NPAs as a percentage of Gross Advances. The Net NPA ratio is simply that number adjusted for provisions for losses and unreceived interest. Since the base for banks would differ, it would be more meaningful to compare the ratios than the absolute numbers. 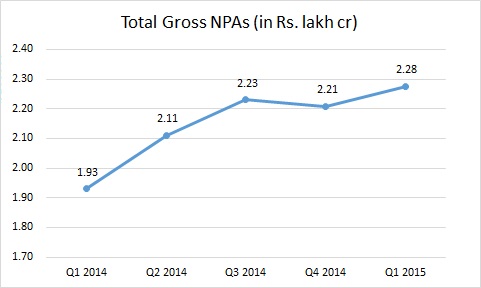 As a weighted-average (based on a specific bank’s Gross NPAs as a proportion of total Gross NPAs), Total Gross NPA Ratio (of all 31 banks together) has grown from 4.516% last quarter to 4.629%, an increase by .113%. Checking out the trend in total gross NPA ratio: 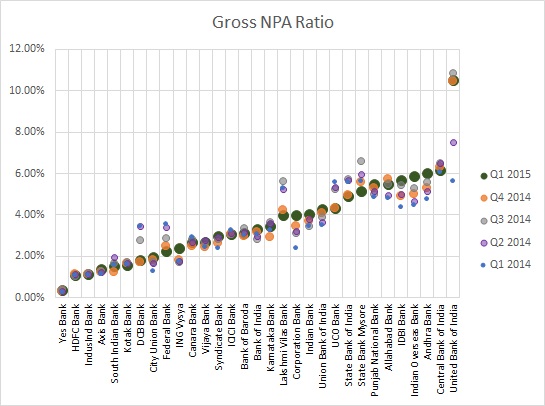 The best bank by this metric, is Yes Bank, followed by HDFC, IndusInd, Axis and South Indian Bank.

On the other end of the spectrum the worst performing bank by some distance, is United Bank of India, followed by Central Bank of India, Andhra Bank, Indian Overseas and IDBI Bank. 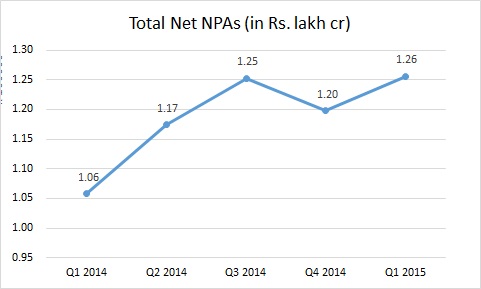 A steady growth q-on-q, except the anomaly from Q3 to Q4, which mirrors the trend for gross NPAs.

As a weighted-average (based on a specific bank’s net NPAs as a proportion of total net NPAs), Total Net NPA Ratio has grown from 2.678% last quarter to 2.794%, an increase of 11.6 bps. Checking out the trend in total net NPA ratio 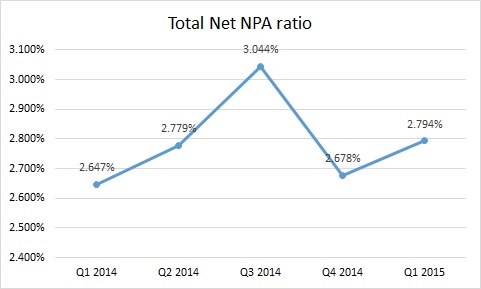 Individually, the banks tell a story of their own: 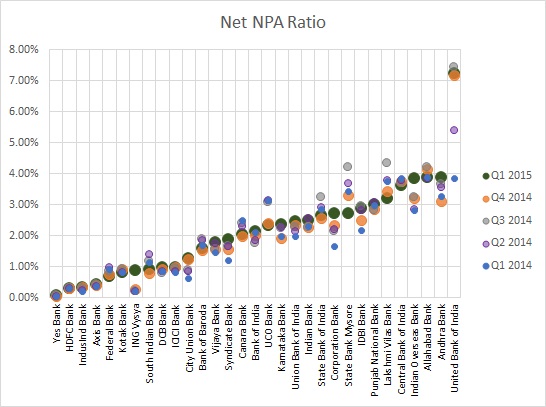 At the other end, United Bank of India is the worst performer followed by Andhra Bank, Allahabad Bank, Indian Overeas and Central Bank.

These ratios are a very strong indicator of the asset quality of a bank; the higher the gross/net NPA ratio, the lower its asset quality.

United Bank of India retains the unenviable position of being the bank with the highest Gross & Net NPA ratios; and by a very large margin. Not just that, their ratios have climbed massively since Q1 2014, a sign that they possibly haven’t been lending too smartly.

With rising default potential, will NPAs of banks get even worse? Already we see an uptick from the March quarter and while the situation isn’t as bad (for the system) as the December quarter, the next quarter will tell if the trend is actually back upwards or if the June quarter was an anomaly.

Note: This kind of research and analysis is what we do at Capital Mind Premium. Do take a test ride!