Note: This post was sent to Capital Mind Premium subscribers on Aug 20, but we’ve made it open for everyone. Do take a look!

The Bhushan Steel debacle continues. After the promoter, Neeraj Singal was arrested in a bribery scandal, supposedly giving Rs. 50 lakh to Syndicate Bank CMD S.K. Jain, in a much publicised CBI arrest. The money was allegedly being given to get a loan extension which, given Bhushan Steel’s books, would not have otherwise been forthcoming.

It has debt of over Rs. 40,000 cr. and all of it continues to be “standard”, it seems. That means there isn’t a default of interest or principal on the facilities.

The debt, from CARE’s rating report is:

(Which is a little short of 1% of the total country’s credit of 65 lakh crore. Put another way, just 150 companies with the debt of Bhushan Steel add up to all the debt in the country!)

This is huge by any standards. Even a Kingfisher’s massive default of Rs. 7,500 cr. would not sound as massive as an exposure of Rs. 40,000 cr. And according to Business Standard, there are 51 banks who’ve lent to it.

There’s only one tiny little problem: Bhushan Steel’s total market cap, at today’s price of Rs. 145, is around Rs. 3,300 cr. That’s less than 10% of the overall debt of the company. 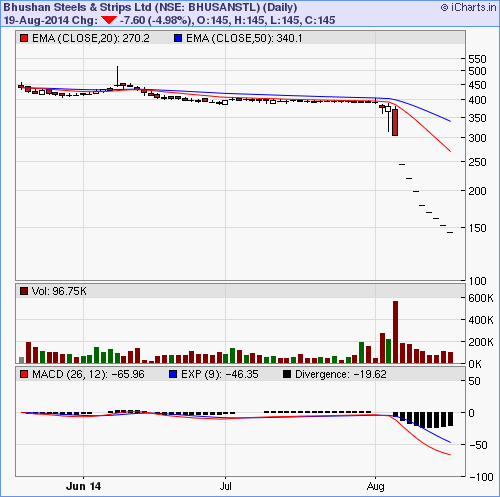 Even though the stock’s in the lower circuit, the company’s shares have been invoked by lenders in the last few days. Around 2 cr. shares (or around 10% of the company) have been “invoked”. This would have been sold in the market as invocation usually means lenders are trying to recover their money.

As long as lenders continue to sell shares, the share price will keep falling. 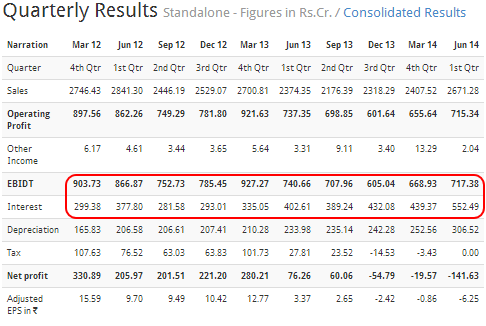 It’s not easy to run this company – they paid over 1800 cr. in interest in the last 12 months, which is a 50% increase from the 1200 cr. in FY13. (Some of the loans are denominated in dollars, which lets them be cheaper) In fact, in the last quarter, they earned an EBIDTA of Rs. 700 cr. of which Rs. 500 cr. was paid out as interest alone! (Look at the red box above – see how much more of a percentage of profit the company is paying out as interest)

Banks should have been worried ages ago, but they apparently aren’t paid to be worried as long as there is no default. There wasn’t one – and Bhushan Steel was getting even more loans (their debt increased substantially, from 19,000 cr. in 2012 to nearly 40,000 cr. in 2014).

Now, as the Syndicate Bank story comes out, it’s obvious that they are not creditworthy and are trying all they can to just stay afloat. With the bribe case, no bank will want to lend more to them. What does this mean for banks?

Banks are trying to fix things by selling non-core assets. The company owns four power plants, a Rs. 100 cr. worth stake in Orissa Sponge Iron and Steel, and Coal mines in India and Australia.

Banks want to appoint three directors to the board, but we don’t believe that will make a huge difference – it is quite unlikely that new directors will be able to control the madness that this has already become. They also want to appoint a forensic auditor, and a deep down forensic audit may reveal more issues than bankers would like to reveal, or even know. (Because that would definitely mark this asset as “non-standard”)

Some banks have even asked the company to sell core assets and lease them back.

In the worst case, the banks will have to take over the company and sell all the assets. It will however still mean a substantial loss, in our opinion. Estimates are that a plant costs Rs. 6,000 cr. per million ton capacity, and Bhushan, after its expansion is complete, will have 5.2 million tonnes per annum. That will still leave a hole of about 10,000 cr. in the system.. (And then, no one gets the market price in distress, people will pay lower)

Rating agencies have downgraded the debt multiple times. CARE has downgraded debt six notches in two months to BB, and Brickwork rates it at C, both of which will require banks to provision more. With no payments for 60 days, the account is an “SMA2” status, which is bank parlance for “oh-damn-this-thing-is-becoming-NPA-soon”.

Note: Too many people are saying that this was “obvious” because the debt to equity ratio was lousy etc. But a lot of companies have bad debt-to-equity ratios, even good ones before they turned the corner. We don’t think it was obvious, and if you’d showed us public data earlier we might not have been unduly worried. Even then, it’s apparent here that there was a lot of give-and-take involved and possibly, there is even more hidden out there than we know.

This is a big exposure, and larger than Kingfisher. Assuming they can find buyers that will pay Rs. 30,000 cr. the net exposure may only be Rs. 10,000 cr. Banks may tide over this one, as there could be buyers for Bhushan Steel. However, in that eventuality, the shareholders will get zero.

The other alternative is that the management fixes company issues; however, it’s unlikely that happens unless the debt overhang is gone or reduced. Their capacity expansion comes online later this year (hopefully) and that production will help them get more revenue and interest paying ability. But till then they need cash, and banks aren’t going to lend cash easily.

In either case, debt will have to be restructured. This looks like a viable longer term asset (if there is no siphoning out of the money). But honestly, with all the bribes and what not, it’s not going to be a huge surprise if the forensic audit reveals that all is not what it seems.

The share isn’t a buy. However, the stock will jump on news – either of a restructuring (which has to happen), an asset sale, or just the fact that the sellers are exhausted and stopped selling. The rot might run much deeper, or this whole thing can be glossed over and RBI can protect everyone by just giving all bankers leeway on the provisioning in case of a restructure.

Banking: The problem isn’t just a Bhushan Steel. It’s the fact that there are such large exposures in the system that are waiting to be revealed, and banks will take the brunt of these revelations. Today, news comes in that Winsome Diamonds, a 6500 cr. default, might have involved siphoning of money abroad. The Kingfisher and Deccan Chronicle defaults are already known. We all know there are large exposures to RCOM, JP Associates and even Suzlon. Banks now have a large exposure to commercial real estate, which is going through the lowest phase ever.

The point is that if a few of these defaults happen together, we’re going to have a serious situation in banks, both private and public. Strangely, while we had mentioned that all was not well with United Bank of India earlier this year, one of the lenders to Bhushan Steel was United bank, which still has 10% NPA (and Bhushan Steel, remember, is not an NPA).

The key takeaway is that this is clean-up time. The mandate must have come from the government, and the CBI has caught more corruption in high places since. The result may be intermediate turmoil, but it’s positive for the economy in the long term.