When you adjust the Nifty for inflation, you might see how high the Nifty really is in comparison with the past. That is, even with today’s Nifty value at all time highs, is it really an all time high if you considered the value of the rupee has fallen due to inflation?

Looking at the Nifty (with reinvestment of dividends) since 1999, we can use a single reference point and adjust all numbers for inflation. If we look at the numbers, both raw and adjusted, here’s what the graph looks like: 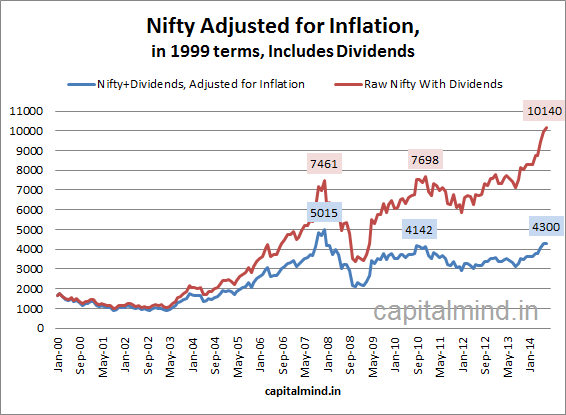 In order for our current high to reach the all time high, it has to cross 5015, which is another 15% away from here.

In fact, considering consumer inflation is even higher, the figures using CPI will be worse. However proper CPI data has only existed since 2011, so it’s not easy to make a comparison over the long term. But we do have a “back-casted series” since 2001, given by the RBI. If we extrapolate it and plot what a Rs. 10,000 investment would have done in the Nifty (with reinvested dividends) and the same thing as inflation adjusted (purchasing power of the year 2000), we see this graph: 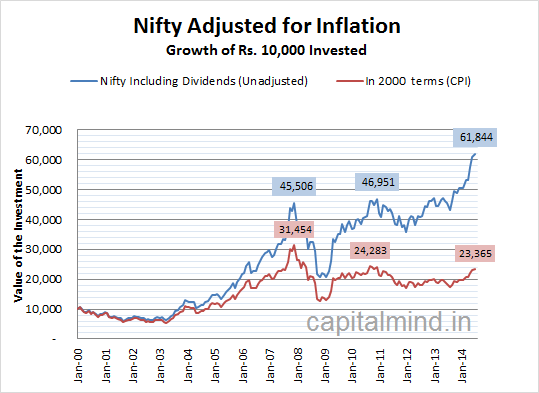 What this tells us: Markets aren’t yet seeing the mad euphoria of end-2007. And really, we aren’t making new highs – even aft Nifty 8,000 our returns are just the same as what it would have been in the peak of 2010. And to get to the highs of 2007, CPI adjusted, we still have to see a 35% increase in the Nifty.