The Railway Budget was announced today. With that, stocks fell hugely today. However, since this comes after a week of an upmove, we don’t think that this move by itself is major.

The Nifty falling over 2%. Real estate was the most impacted, down over 7%, with infrastructure down 5%. 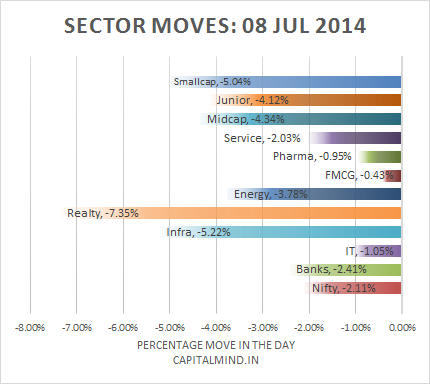 The markets were hit by a big selling wave. However, it turns out that FIIs had net bought stocks! They bought Rs. 400 cr. worth stocks, while domestic institutions sold about 400 cr. worth as well.

It’s likely people were disappointed with the lack of big ticket announcements. It’s likely that budget expectations were high and the actual railway budget hasn’t been very friendly. Rail stocks were down big:

On introspection we find the Railway Budget was fairly even handed.

Our notes from the budget are at the end of this post.

No FDI Yet, The Big Deal

The biggest disappointment was FDI in Railways. One would have expected that announcement to have come today. But it didn’t; it was deferred to the Cabinet, which doesn’t have a set time frame to say okay. The lack of FDI means that some of the ambitious changes – of Public-Private Participation in expansion – will be stalled, as capital for some of the larger Indian infrastructure companies isn’t very easily available.

But BEML and Container Corp will benefit. The other rail companies – Kalindee Rail, Texmaco, Titagarh Wagons and others have all run up a lot so while they will see revenue, this budget isn’t going to meet the expectations of ludicrous profits.

As more train and station upgrades happen, eventually tourism will increase. But this might be limited to the religious places specifically targeted, in the near term. Which, again, has very few public companies participating.

The technology upgrade to the ticketing system is unlikely to involve anyone other than IRCTC. E-Commerce companies may benefit if the Railways streamlines parcel delivery and reduces delays. Milk transporters and truck companies could have a negative impact if the railways implements plans to move into the space, as it has mentioned in the budget.

So we don’t feel that unless the Cabinet approves FDI in Railways, we aren’t going to see major moves in the rail companies. The railway budget hasn’t been all that important in recent years, and while this year was expected to be different, it wasn’t.

Here’s a quick list of Railways announcements. (From Capital Mind)

Changes to Trains and Stations

Where’s the money going to come from?