Looking at the Eight Core Industries Data for May 2014 we are tempted to think of this as a recovery. But it’s strangely not, after going through a detailed analysis. But first, the concept.

The Eight core industries are the “critical” sectors of the IIP, or the Index of Industrial Production. These are sectors close to the heart of what used to be India’s growth engine in the past, such as Fertilizers, Crude oil, Steel, Cement, Electricity and so on. These still form about 38% of the IIP. 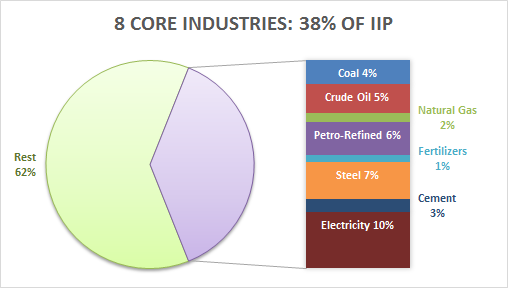 The “rest” are things like textiles, leather, consumer goods etc, which are probably a better indicator of our economic growth.

The idea is to see how much production has increased in these industries on a per-unit basis (not in terms of amount of rupees). This allows us to see “real” growth, because if we looked at prices that would have built-in inflation and so on. So electricity is measured in megawatts produced, steel in tons etc.

Let’s look at the May data. This data comes out every month (for the previous month). The IIP for May will come in only on the 12th, so in a way we do get some advance notice of the 8 core industries.

• Natural gas and Petro-refined products have fallen in production from last year, by over 2% each

• Fertilizers is the top performer at +17%

• Steel, the second biggest weight in the Core Industries Index, has fallen 2% for the first time since Aug 2013 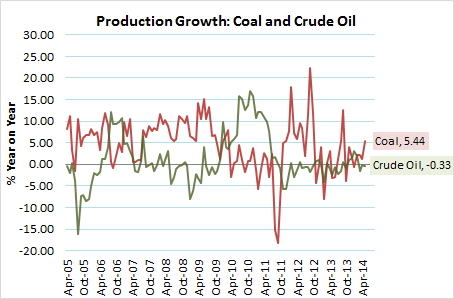 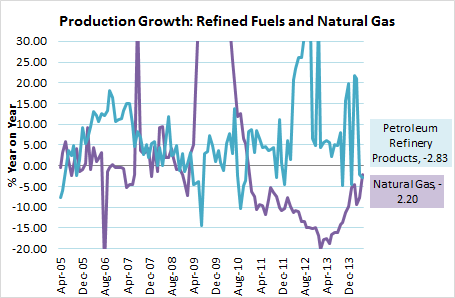 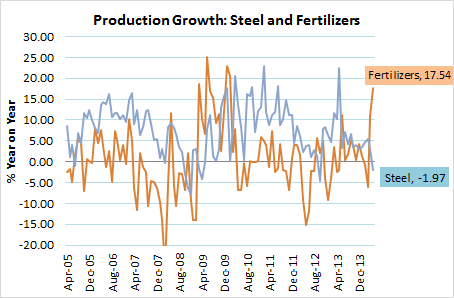 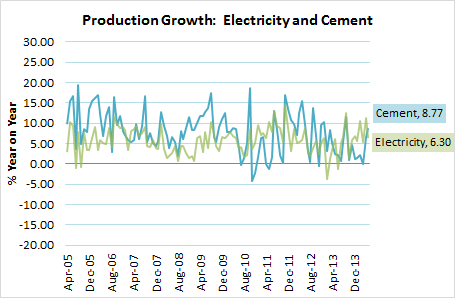 We see an impressive 6% improvement in the Index year or year. 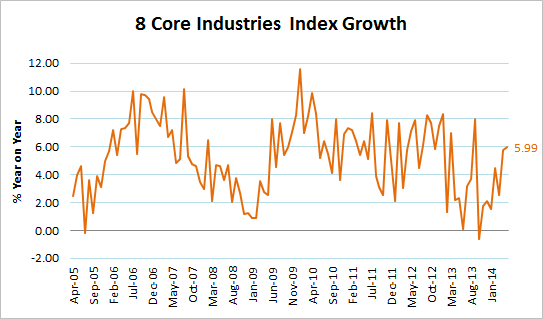 However, this is not going to help much. Because of the different weightages in the total index, the net impact to IIP growth is actually lower than the previous month! 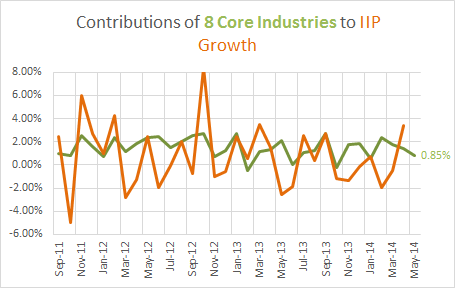 You can see how the green line droops down. The contribution of the 8 core industries to the overall IIP was 1.43% in April, and the IIP for April was up 3.3%. For June, the 8 core only contributes 0.85%, even lesser than April.

Let’s show you with an example.

The best performer, fertilizers at +17%, hasn’t impacted the index much because it’s weight in the IIP is just 1%. It’s total contribution is just +0.11%.

Whereas, Steel was -2% and it’s weight in the IIP is big (7%) – so steel’s contribution is a negative -0.17%, which eats up all the growth in Fertilizers and then some.

The IIP itself has behaved oddly in comparison with the Eight Core Industries, so you can’t really say it will follow the same trajectory.If it does, we will see a dismal IIP headline note this month.

However it’s important to note that the Eight Core Industry data tells us something: While the 8 core data is better than the previous month, the effective contribution to IIP growth has fallen, which might lead to a lower IIP figure than in April.

Given how markets are, you shouldn’t use this information to trade. But steel production falling indicates an industrial slowdown, as do drops in production of crude and refined fuels. With the turmoil in Iraq, rising pump prices and a bad monsoon, we expect no increase in these metrics. (But don’t tell the stock markets, which don’t seem to care about any bad news whatsoever)