To continue from where we left off with the Statement of Foregone Revenue, let’s now look at how companies have availed tax sops at different levels.

Note: We use the Statement of Foregone Revenue for FY2012-2013 which contains data on corporate returns for the year that were filed by the 31st of March, 2014. From these returns, the government gets data on how much companies use the tax exemptions (meaning monetary value, numbers) from which they can estimate foregone revenues for that year. These are lagged reports. Now the government already knows how much they have received as ‘Corporate Taxes’ up till 31st March 2014; that’s for the current year, FY2013-2014. So now, they have data on taxes received for the current year, and taxes for the previous year; they obtain the growth rate in corporate taxes, and then use this rate to estimate the potential ‘revenues foregone’ for the current year. This year, corp tax grew at 10.76%, up from a growth rate of 10.23% seen the previous year. Based on the 10.76% rate, we have estimates of Revenues Foregone for the current year.

We’ll list out the major contributors with their values: 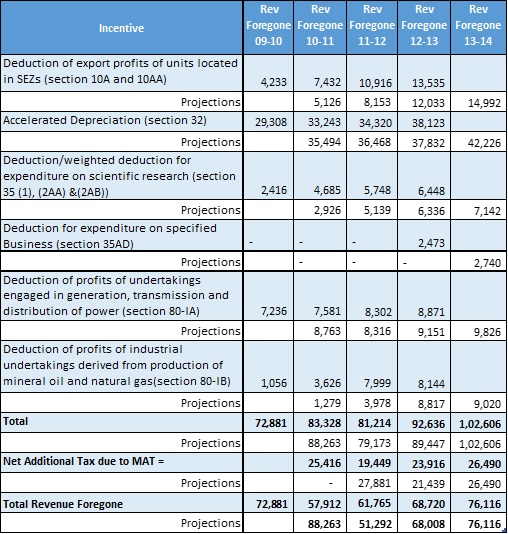 Now, there are a few simplifying assumptions that are made in order to arrive at the estimates, so it makes more sense to use these figures as tools for comparisons, rather than look too closely at their absolute values. 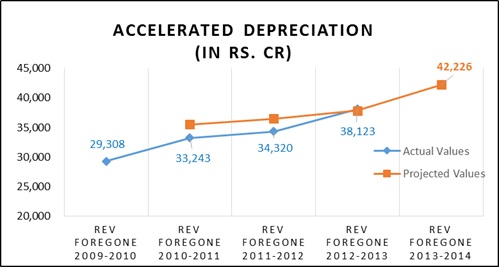 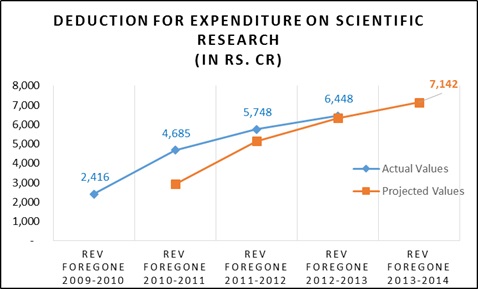 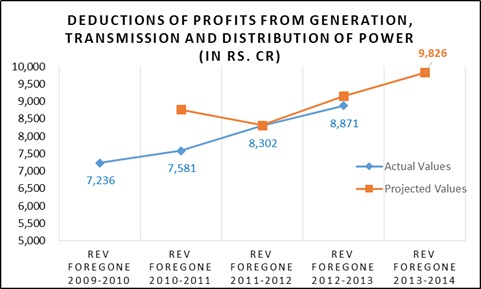 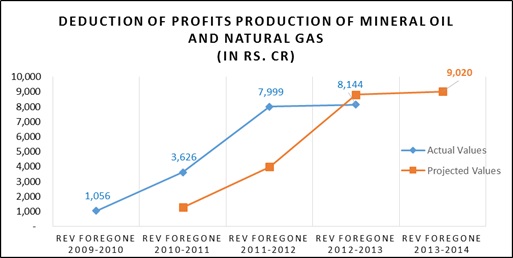 For the current year, the stat tax rate was 32.445%. Based on this, an estimate of total revenue foregone from corporate taxes was estimated at Rs. 68,720 crores as against a projection of Rs. 68,007.60 crores that was made. Part of this increase can be attributed to the inclusion this year, of a deduction for expenditure on specified business, which amounted to Rs. 2473.4 cr.

When we analyse the trend of Revenues Foregone, we spot something quite intriguing.

In 2009-2010, we see that the Revenues Foregone was Rs. 72,881 cr. The following year, there was an introduction of a concept called Minimum Alternate Tax (MAT) on companies. So this is how it works: The government levies a minimum tax of 20% on the net profit of a company. Now, if this MAT is greater than the actual tax liability of the company (taxes that are to be paid as per the normal tax laws), the excess tax liability is allowed to be used as a credit within a period of 10 years. This credit can be used to cancel/reduce future tax payments. In other words, the excess is considered a pre-payment of future taxes.

Hence, any excess that is paid out by companies due to this concept of MAT, has to be included as additional revenue for the government, and hence reduces the Revenues Foregone. Due to this, Revenues Foregone for subsequent years (2010-2011 onwards), is reduced by the amount of ‘Net Additional MAT’. That explains the reduced figures we see at the bottom of the table. 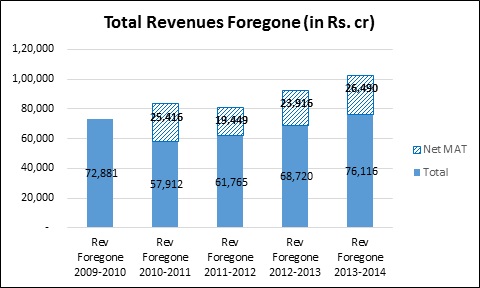 Even though this concept of Revenues Foregone is purely a notional one, its analysis can reveal some insights into tax-exemptions and into the trends of usage of various concessions.