Each year, the Ministry of Finance, along with its annual Budget, releases a Statement of Revenue Foregone. This year, being the NDA’s first tenure in 10 years, would be an interesting one from a financial stand-point: it gives us some insight into the direction that the policy-makers could be headed towards. These are only estimates that are put forth by the Government based on a few simplifying assumptions, and have been arrived at using the statutory tax rates applicable during that financial year.

Note: We use the Statement of Foregone Revenue for FY 2011-2012 which contains data from corporate filings received on or before November 30, 2012. This document also contains projections that were made for FY2011-2012 (hereon referred to as the previous year), and can be used in comparison with the Statement of Revenue Foregone that was released this year. The data presented in the above link, refers to corporate filings received on and before 31st March 2014, for FY 2012-2013 (hereon referred to as the current year). It also contains projections for FY2013-2014.

What does ‘Revenue Foregone’ mean?

For the government of any nation, taxes (both Direct and Indirect), are the major source of revenue. These taxes are imposed upon companies, individuals, HUFs, charitable entities, Association of Persons (AOPs), Body of Individuals (BOIs) and local authorities.

The rate at which each of these entities are taxed, along with definitions of various tax-related metrics (tax-base, taxable income-slabs, exemptions and so on) are governed by the Income Tax Act, 1961. This Act allows several measures that companies and non-corporates (including you and I) can undertake in order to reduce their Taxable Income. These measures could be tax exemptions, deductibles, rebates, tax deferrals and credits and special tax-rates. These measures can apply to either the tax base (the amount that is taxable) or to tax rates (the percentage that is to be paid out as taxes).

As a result of such measures, the statutory tax-rate (the tax-rate specified by the country’s laws) can be effectively reduced by those that come under the gambit of said laws. This in turn, means potential revenues that are lost by the government. These, are termed as ‘Foregone Revenues’.

Taxes levied on income and profits, are termed ‘Direct Taxes’. These are paid to the government directly by the tax-payer who is also the tax-bearer.

There are also ‘Indirect Taxes’ which include customs duty, excise duty and other taxes. These are levied on goods and services (e.g. VAT, Goods & Services tax). Why are they called ‘Indirect’? Because they are initially paid by the producers and manufactures (tax-payers), while the burden is passed on to the consumer through increased prices (and hence, the consumer is the tax-bearer).

The Statement of Foregone Revenues for FY2012-2013 that was released (as well as its precedents), analysed the potential foregone revenues under 2 main brackets, Direct and Indirect Taxes. We will dissect the Direct Taxes paid by Corporates in this post.

Before we delve deeper into the numbers behind taxes, let’s first look at what the general trends are for statutory tax rates specified by the Income Tax Act. As we see below, the general trend for taxes payable has been upwards (thankfully so, otherwise that would mean that our companies aren’t making increasing profits!). The slight dip in FY2011-2012 is probably due to the drop in the statutory tax rate to 32.445% for FY2011-2012. At the same rate, the current year has shown an increase in taxes payable.

We see a similar trend in Dividend Distribution Taxes payable as well.

If we look closely at how many companies belong to each of the slabs, it throws up an intriguing number: 48.9% of the companies report profits between 0 and Rs. 1 crore. That’s nearly half of the entire list!

Add to this, the 46.01% that makes either zero profits, or losses. A combined 94.91% that makes below Rs. 1 cr as profits before taxes, an increase from 94.05% last year. Terming this quite bottom-heavy, would be an understatement. There are evidences that larger companies (those with PBT > Rs. 500 cr) have taken more advantage of the various tax exemptions and concessions proffered by the government.

48.91% of the companies reported PBT between 0 and Rs. 1 cr this year. These companies had an Effective Tax Rate (ETR) of 26.73%, while the tax-rate of the entire sample was lower, at 22.85%. This implies that there is one or more of the PBT slabs that enjoyed a relatively much lower tax-rate than these guys.

And that was the slab with companies having PBT > Rs. 500 cr, which had an ETR of 20.97%. An indication of how larger companies avail higher tax concessions. In fact, the ETR for these companies has been reducing over the years. 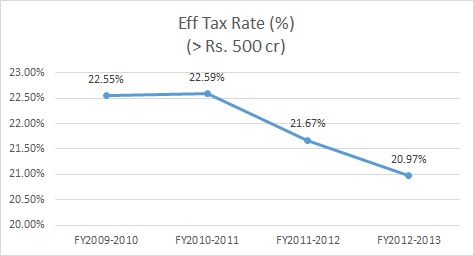 Another interesting number here: firms in the highest PBT slab accounted for a cool 61.28% of PBT, while their share in total corporate IT payable was lower, at 57.27%.  Their share of PBT has also been increasing over the years. Again, another indicator of them being in a better position to make use of the tax exemptions provided.

Whereas companies with PBT > Rs. 500 cr, have to pay taxes on only 66.36% of their PBT. Meaning, they’re more geared to take advantage of exemptions.

Based on these figures that were obtained from corporate returns, revenue foregone can be estimated by using the corporate tax-rate of 32.445%, and then arriving at a final figure to represent the “Revenue Foregone”.

Considering that the statutory tax rates have been changing over the years, the figures aren’t exactly comparable. However, with the rates being constant since the previous year, we can see that revenue foregone has been showing an upward trend. 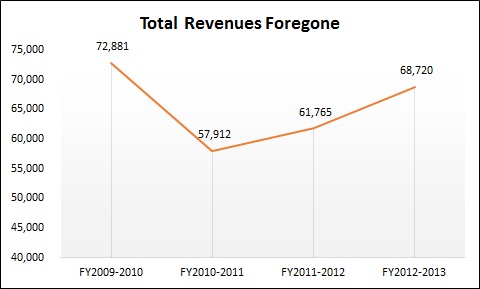 The key takeway is that exemptions seem to work better for larger companies. Some exemptions, like a tax benefit for investing Rs. 100 cr. in a manufacturing setup, will only be usable by large companies. But even others, like accelerated depreciation, production of natural gas, or SEZ export sops work better when you have scale. The small company has little to play with, while the big boys pay lower and lower effective tax rates every year.

We’ll have much more on this topic, including details of how tax sops have been used, at the personal and corporate levels.

Note from Deepak: Please welcome Gautam Jagannathan to Capital Mind as he contributes to our research desk and as you can see, has hit the ground running!