After a long time, the market fell more than 1.4% today. This is considered a bad day. It’s a weird world we live in now. It has been 89 days since we have seen a 2% down day. We simply haven’t seen a day that has gone 2% down from the previous close, after 27 Jan 2014. 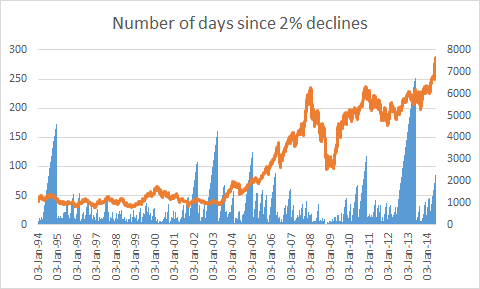 So Capital Mind got caught up in the magic and appeared quite surprised about what happened today with the FII figure. We said FIIs bought 1,100 cr. worth stocks today, surprising for a day that saw carnage in the mid and small caps.

However, the big deal was Hero Motocorp. Bain Capital, their largest shareholder, sold 56 lakh shares which it held in its Indian subsidiary, for Rs. 1481 cr. This had been pre-announced, and the deals were done on the exchange via a merchant banker. Considering that most of these shares would have been bought by foreign investors, we can assume that Rs. 1,400 cr. was bought by FIIs; and effectively it was Bain Capital (an FII) which sold them.

But because Bain owned an Indian entity which held the shares, the data will show only the FII “buy” figure. If we net out that Hero Motocorp purchase, FIIs actually sold Rs. 300 cr. (Total buy: 1,100 cr, consisting of 1,400 cr. of Hero, but -300 cr. of selling otherwise)

(However, we shouldn’t net it out, because it’s a valid purchase.)

This still means nothing. Selling 300 cr. is irrelevant for the most part, for FIIs.

Just wanted to clarify the story on the 1,100 crore figure that seemed to astound us.