RBI, in its monthly bulletin, has revealed that in April, it bought $4.84 billion worth of dollars, net of forward exposure.

RBI buys and sells dollars in the spot and forward markets. To buy dollars, it will print rupees and provide them against the dollars bought. This increases the balance sheet size – more dollars on the asset side, more rupees on the liabilities. When selling dollars, the reverse happens: RBI shrinks its balance sheet by selling dollars, and the rupees it gets in return will go out of circulation. 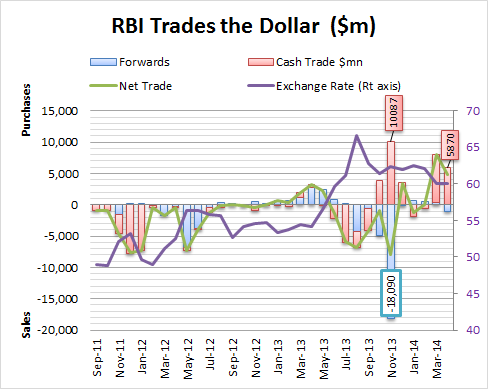 We’ve seen an interesting few years. Although forex reserves sound like they’ve gone up, we have reduced forex exposure in the last few years. 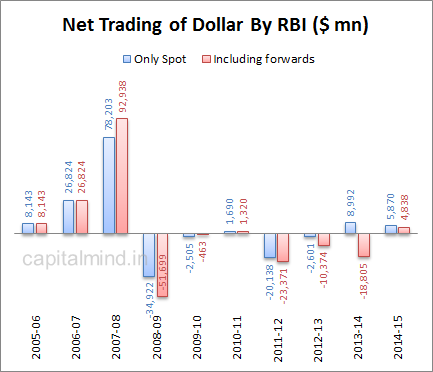 Does this mean the RBI Balance Sheet is shrinking? Not really – it can replace the dollars on the asset side with Indian government bonds, or Gold. Both of these have been bought in the last few years.

This april, however, there hasn’t been much balance sheet expansion. The $5.8 billion bought (in spot) by the RBI has required the printing of around Rs, 40,000 cr, but RBI held a number of government bonds which have matured, and they received that money, which went out of circulation. This amount was around Rs. 45,000 cr. or so; and the RBI hasn’t bought any fresh bonds (they have to announce it), so on a net basis, the RBI has bought some dollars and lost some bonds, so it’s asset side remains about the same.