Rainfall in India is now 43% less than normal, which at the end of June is the third worst in the last 100 years. 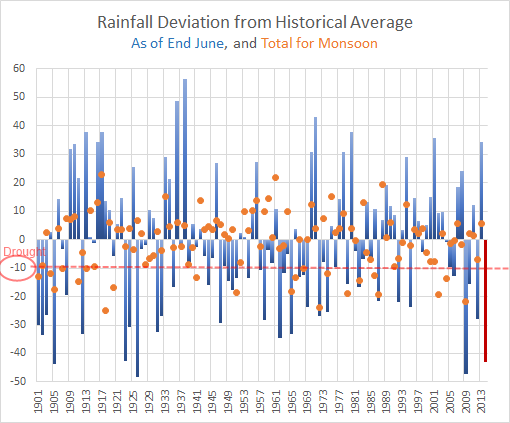 The orange dots depict where the season eventually ended up (in September). It isn’t necessary that June is a harbinger of things to come. The 1923 and 1926 data shows June numbers being hugely negative but ended up as non drought years. The last drought, in 2009, ended up more than 20% below normal by September but was down nearly 50% in June.

While June isn’t such a big deal yet (lots of things can change) it does look like things will be increasingly difficult.

The problem? Inflation of course, since sowing will fall, supply will reduce and prices will go up.

Plus, to pacify farmers, the government will give some kind of debt waiver or cash subsidy that the rest of us have to pay for. It’s going to get ugly, if the rains don’t come.