The government continues to buy food and stuff its buffers but things seem to have come under some layer of control now. The Food Corporation of India (FC() buys food from the market and stores them in warehouses.

FCI is required to maintain certain optimal buffers because the food it buys goes to the Public Distribution System (PDS) at lower prices. The buffers it must maintain are specified on a per-quarter basis.

The latest data (May 2014) shows they have stocks of Rice+Wheat that add up to 548 lakh tonnes, with another 123 lakh tonnes of unmilled paddy, adding up to 671 lakh tonnes of rice+wheat. (67.1 million tonnes) This is more than 4x the buffer needs which is just 152 212 lakh tonnes. (figure corrected) When we have so much in stocks already, why do we buy more? The standard answer is that farmers have to have a buyer. I don’t think so. The government buys to distribute food, not to store and let it rot. we should stop all buying until we’re close to actual requirements.

The saving grace is that we are slowing down buying: 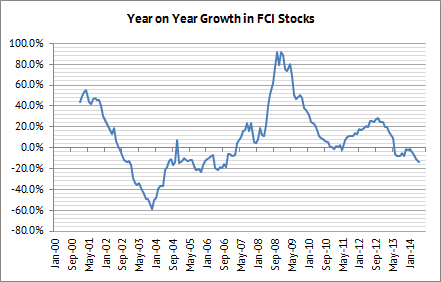 If you wonder what the Food Security Act will need – it’s between roughly 500 lakh and 550 lakh – and we have current stock of 20% more than even that. Already the government is procuring more than 30% of all production, which we should eliminate over time. The Food Security Act must be rationalized to much lower requirements, and we should strive to keep production higher while removing the large middleman cost.

The Food subsidy is going to be Rs. 100,000 cr. in the year, and we need to create a mechanism to lower this for the sake of a more sane fiscal deficit.

Update: Alert reader   points us out to the fact that the June data is now available. Here are the charts for June: 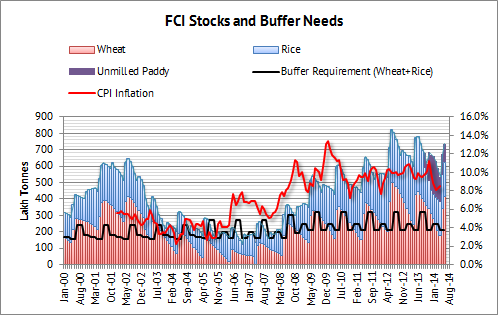 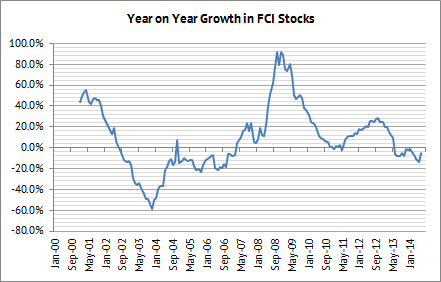 We now have 736 lakh tonnes, which is nearly 4x buffer requirements, and substantially more than the FSB needs.