Raghuram Rajan will be furious. One more insane monetary policy and he’ll have to bear the consequences. Mario Draghi at the ECB today announced an unprecedented low on interest rates. Not only were lending rates brought down to 0.15% (with even the marginal facility down to 0.4%) we are now seeing deposit rates of the ECB dip below zero! 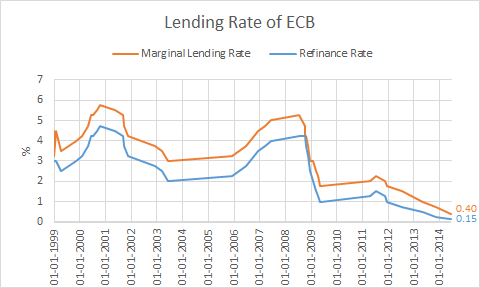 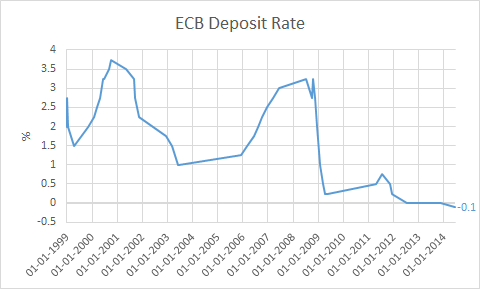 This means that if banks deposit excess reserves with the ECB, they will get less out than they give. The central bank is actually charging them to keep money in reserve instead of lending it out.

The ECB at last look had $32.6 billion of reserves till June 10. This will cost banks about $9 million per day if they keep it with the ECB.

Why will Rajan be Furious?

Well, where do you think that money will go if it can’t go into the ECB? It’s likely the money floods other markets. However, banks lend only when (thanks to Mish):

And Mish is right when he says this will not immediately spur lending because customers aren’t getting more credit-worthy through this mechanism. At some level, that ECB money will go into assets like stocks and bonds and increase their value. And it’s likely the money flows into the Emerging Markets like India as well.

At this point the best thing to do, in my opinion, is to free the rupee completely. Give people a choice of another currency where we “complain” of growth being 4.5%. And use the current liquidity (inflow) as a mechanism to temper volatility initially; we will never be able to do this easily when the world takes liquidity away. The Modi government can do this, and create the necessary laws that allow foreigners to buy our rupee debt without limits, that the market for the USD-INR is actively traded, and that we can pay for some of our imports in rupees. And it would be brilliant if Indian companies can borrow cheaply in the Euro region and use the money in India.