How bad can government buying of food get? I plotted CPI inflation since 2002 along with Food Corporation of India (FCI) Stocks compared to the buffers they must maintain.

Note: CPI inflation is based on the RBI “back-casted” data which they had built from current CPI data (which only goes back to 2011) and translating it back using another CPI measure called the CPI-IW. 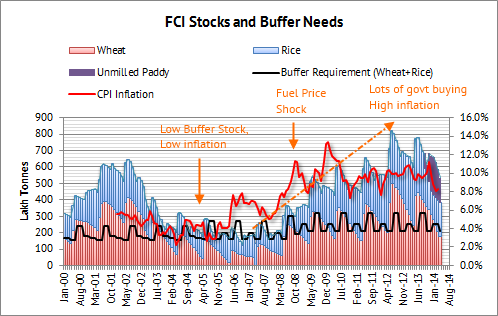 Updated: @karthiks gave me an idea – of showing this graph as essentially the difference between actual buffer stock and requirements (the “excess”) versus CPI Inflation: 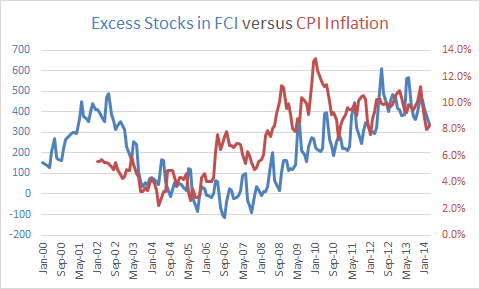 As you can see, inflation has built up after there’s sustained buying of foodgrains by the government way above the buffer requirement.

In 2000 we don’t have the backcasted data, but CPI inflation went to as low as 3% and then, on the back of the crazy buying, went to above 6% as we can see in the early part of this graph.

Between 2003 and 2006, we saw very little buffer stock changes, so the government wasn’t a big buyer, and inflation remained benign.

The massive buying from 2009 to 2012 coincided with inflation remaining persistently above 8% and going as high as 12%.

In recent times, the buffer stocks have been coming down, and (surprise!) inflation has been coming under control as well.

With the Food Security Act, Buffer norms will be increased. How much? By about 60%, which means between 300 and 480 lakh tonnes. For the most part, we’ve maintained even more than that!

Is high inflation really surprising that when the government is a bigger buyer every year – and it seems at prices that are increasing at more than 12%!

If the past is any indication, the government will not respect the buffer levels. They’ll just buy like crazy when they want to, with no respect to the inflationary impact of the exercise. What will the next government do?