Suzlon has managed to get lenders to restructure $485 million of FCCBs, with a step up convertible bond issue that can be converted at Rs. 15.46, over five years, with an average coupon of 5%.

Suzlon has around 266 cr. shares outstanding. This includes a recently issued 18 crore shares as part of a Corporate Debt Restructuring agreement for rupee debt.

The new bonds carry a coupon of average 5% over five years. The first 18 months carry 3.25% interest and the rest, 5.75%. (Source: Company disclosure)

At the end of 5 years, lenders can convert the shares at 15.46 if they like. Assume they do.

Remember they have only 266 cr. shares outstanding right now.

Or Truckload of Repayment

What if the share doesn’t go above Rs. 15.46? Lenders won’t convert, and the company will have to repay all of that money.

It’s not apparent how, after the wind bubble has more or less gone bust, the company can generate the 3700 cr. needed to pay this loan back. 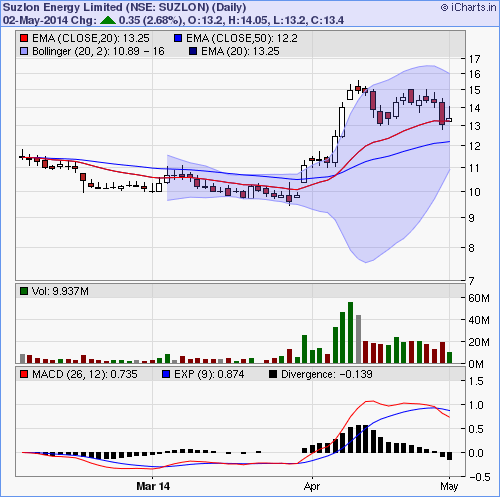 My view: I’m coloured by the past. So I’m not very confident of this deal helping the company, unless energy prices go through the roof. Technically though, the stock looks like an interesting short term trade if it went strongly above 15, with a 10% stop loss. Of course that applies to literally every stock nowadays – you could randomly pick a stock and it seems to go up 20% in no time!