The big news of the week was about a mega-merger of two of India’s largest pharma companies, Sun Pharma and Ranbaxy.

Ranbaxy shareholders will get 0.8 Sun Pharma shares for each share they own. This is a stock only merger, which means no cash will be paid out.*

* Except if you get a “fractional” holding. If you own 22 shares of Ranbaxy, you’ll get 17.6 Sun pharma shares. In India you can’t own fractionals, so they’ll give you money for the 0.6 shares, and you’ll have 17 Sun shares.

The merger will create, according to the companies, the 5th largest generic pharma company in the world. Ranbaxy has had serious issues with the FDA of late, resulting to blocking of imports from many of its plants in India including the big Toansa plant.

The deal should be completed by end-2014. Daiichi has had to give an indemnity for any FDA actions against Ranbaxy so that Sun is insulated from this exercise. This indemnity does not impact any other shareholder at this point.

In the last week, it looks like someone had a whiff of the deal. Why else would the price shoot up from the 370 mark upwards to 460 in a few days? 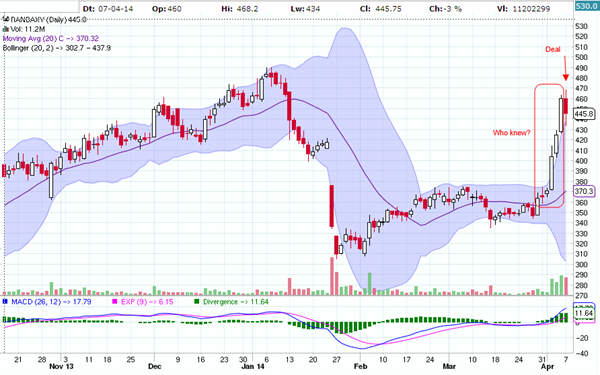 SEBI must investigate, and fast.

Capital Mind View: This is a phenomenal deal in the pharma world, where size does matter. More doors open as you grow bigger. However there is a bigger risk with adverse FDA action against Indian companies (which could stem from lobbying by the US giants which feel threatened). Having said that the ability to both innovate and increase their generics footprint gives the combined entity a larger scope for growth.

Disclosure: We have had family investments in Ranbaxy for around 2 decades, and it’s done really well. In one sense there’s a sense of sadness that the Ranbaxy brand will be gone, but the prospects with Sun look better for the company.