I’m still on holiday. But the itch to write doesn’t quite go away. So here’s a thought on the recent RBI policy. Most of the business journalism has missed the two points, which is unusual, or I’m not reading the right sources. My view:

The Really Big Deal Was Not Rates

The fact is that RBI didn’t change any rates. Repo remains at 8%. Reverse repo at 7%. MSF at 9%. If you don’t know what these rates mean, don’t worry, hardly anyone does nowadays. Basically, rate changes were not expected, as inflation is around 8% and declining (CPI) and a rate change would require inflation to be much lower and to show sustainability at lower levels.

But one really big deal was the way RBI is working at liquidity. This is nuanced so buckle up for a bit.

RBI is supposed to be a lender of last resort. Banks can borrow from customers (deposits), from wholesale markets (CDs or bonds) or from other banks (interbank call money) If banks can’t find money anywhere else they have the RBI to borrow from. For such borrowing, the rate, before July 2013, was the overnight “Liquidity Adjustment Facility (LAF)” rate, which is known as the Repo rate. That’s what banks pay to borrow overnight from the RBI.

But it was turning out that banks were turning to the RBI as the “first” resort. Banks, for the longest time, borrowed at the repo window first to meet their cash needs. The concept then was becoming that RBI was being used as a lowest cost borrowing mechanism rather than a lender of last resort.

The Liquidity Change: Targeting Call Instead of Dictating Repo

RBI has therefore decided to curtail unlimited repo overnight borrowing. Last year, they cut it to 1% of NDTL (Net Demand and Time Liabilities, think of it as total deposits in the system). Then they cut it to 0.5% in August 2013. Now, they’ve cut Repo to 0.25% of NDTL in the April 2014 Policy action.

What does a bank do when it can’t borrow from RBI repo?

Answer: It borrows from RBI in the MSF window (at 9%), or it bids higher for term repos. I’ll explain.

Earlier the lack of borrowing from RBI at the repo window had only one alternative, the dreaded “MSF” which was the same thing, but at a higher rate. (currently, 9%)

Since October 2013, Rajan at the RBI introduced the concept of Term Repos which are basically borrowing facilities from the RBI but for a longer term than overnight. 14 day term repos became standard; you could borrow, but you had to pay interest for 14 days whether you needed the money or not for all of that time.

The difference? The term repo wasn’t at a fixed rate. Every term repo was “bid for” which means every bank had to say it wanted X amount at Y interest rate. That rate couldn’t go below the repo rate. Effectively, banks could get money, but they would get it at higher than the repo rate.

RBI then kept increasing the amount available in term repos according to liquidity needs. Apart from the standard 14 day repos, they did 21 day repos and 28 day repos and all sorts of figures going as high as Rs. 50,000 cr. just to keep banks fed with enough money.

Since the “first resort” overnight repo borrowing was limited at around 38,000 cr., banks switched to satisfying their needs with term repos. They simply didn’t know how much money they might need, so they just borrowed everything they could.

That left a lot lesser to borrow in the actual overnight repo.

As you can see, massive increases in term repo have happened, and overnight repo (the red line below) has fallen substantially. Right now, there’s about Rs. 1.1 trillion (1.1 lakh crore) that banks have borrowed in term repo. 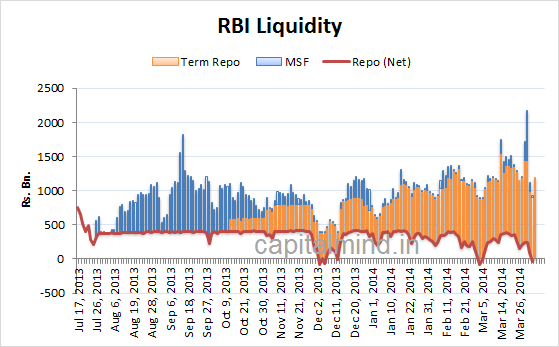 What if banks borrowed more than they needed? They’d have to dump it in the interbank market – the market where one bank borrows from the other, known as the money market. Call money is overnight borrowing between banks, and that call money rate is decided between the two parties.

Now, the RBI’s stated goal is to continue this system by doing term repos more, and decreasing further the available liquidity in the overnight LAF repo.

This will mean banks will have to borrow more than they think they need and then use the call money market to offload excess liquidity (or borrow even more, should they have borrowed less).

The interbank call money market rate then gives the RBI a better indicator of liquidity. That rate should be close enough to the repo rate, so that banks would rather borrow from each other than the RBI.

This is a change in the liquidity system, and RBI has attempted to moved actively from now (lender of first resort) to an actual lender of last resort. The “last resort” is the MSF, which is still available at 9%.

Banks will end up paying more for liquidity. The increase is marginal – probably 0.2% to 0.6%. This is effectively a higher interest rate! And it has happened in the last few months, without anyone realizing the rates have actually gone up.

But the reduction in the repo limit will not have any immediate impact – as you can see, banks weren’t borrowing much in repo anyhow. They had already moved to term repos. The interest rate hike has already happened while we weren’t looking.

RBI still remains the first resort for banks. The Term Repo system institutionalizes longer term borrowing (than overnight) but at Rs. 1.1 trillion, it is a substantial amount of liquidity RBI is adding to the system every day. Call money rates are still all over the place, changing massively within the day.

Banks will have to get their cash management act together fast. It’s nearly impossible to estimate cash needs daily, but they’ll have to do a lot more in the money markets. Otherwise you’ll see a lot more borrowing in MSF and a lot of “reverse” repo (where banks that have borrowed too much park money at the RBI at 7%). That signals immaturity and it is expensive for banks – this is an incentive for them to learn and get better.