Today, let’s look at indicators and basic trading logic. We know about moving averages. They are a time series that tells us the trend of a stock, by checking if the MA is rising (uptrend) or falling (downtrend). An MA is derived from the price only, and nothing else.

More such indicators can be built. Some are built on Price, others on a combination of Price, Volume, or Open Interest. If I compared a stock to it’s own price range of the last 10 days, and plot the current price as a percentage of that very range, I will get, for every single day, a number between 0 (at the low) and 100 (100 percent means the stock is making a new 10 day high). This is a Relative Strength indicator, the strength of the price of a stock relative to it;s own

A more complex mathematical formula is used to calculate an indicator called the Relative Strength Index (RSI).The RSI is an “oscillator” – it moves between 0 and 100. (A moving average has no up or down limits). It uses the ratio of average gains to average losses in the last 14 days, and bases this to 100. 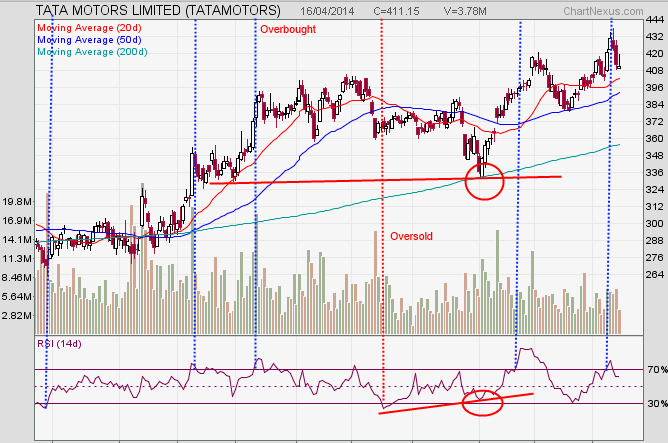 Welles Wilder, the creator of the RSI (in 1978) defined the levels of 30% and 70% and oversold and overbought. The idea is that the stock reaches temporary peaks or troughs when it goes to extremes. But this is not always true that a stock will rebound – in a strong uptrend the formula ensures that the RSI remains high (for instance, if there are 14 consecutive gaining days, RSI=100)

A “rising” RSI tells you the stock is moving up fast, that up-days are bigger than down-days, in aggregate, over the last 14 days.

(14 can be replaced by any number of days you choose)

RSI is thus a Momentum Oscillator. While Moving Averages tell you the trend (direction), an RSI gives you an insight into the speed of the movement (momentum).  You would generally combine the two to make a trade.

Using the RSI to Trade

The red circles above point to an interesting trade. The stock rebounded to a long term moving average (200 day).

It was also a lower low and there is a support right there. The horizontal line shows the support, a retracement to that level a while back.

While the stock is doing this, the RSI does not go to “oversold” levels – in fact it is higher than the previous low. (This is called an RSI “divergence” – that is, the price shows a lower low, but the RSI has a higher low.)

We’ve now used three indicators – the RSI, the Moving Average and the support line and the trade at that point would be – if the stock reverses, it’s time to go long.

The stock did bounce off and an entry would be at around 348. In a very short time, the stock went up 15% to 396, before it went into “overbought” zone.

The Downside of RSI

What if the RSI is going down? It doesn’t tell you the stock is going down. If the RSI goes down it could just be that the stock is trading sideways, and not going anywhere. In fact it’s only at extremes that it tells you the movement has gone beyond a “sideways” movement.

In a narrow range, the RSI fails to tell you a lot. Consider a stock that has gone up 0.01% every day for 14 days. The RSI is at 100, but the stock hasn’t moved much! It doesn’t tell you about the amplitude of a move, and for that you need different indicators.

The concept of “overbought” or “oversold” is usually thought about as – if it’s overbought I should sell. But in sharp trends, you find that overbought stocks get even more overbought. It is therefore important to “reconfirm” with another indicator that would confirm a reversal of trend, and it should not be a momentum indicator using only price (you will reconfirm using the same data). For instance you could confirm using a moving average based indicator (like MACD) or a volume based one (like On-Balance Volume).

The four main points of trading or investing

There are four concepts of investing:

Note that of the three above, only one thing makes you the best long term returns. Hint: It is not points 1, 2 or 4.We’ll take these in detail in later lessons.

To demonstrate – let’s take the four points, for the trade pictured above.

First, which stock to trade? You don’t have to trade Tata Motors. Most of the time, there is no trade there at all. You have to choose stocks that see a trade in the first place. That means you have a list of stocks whose charts you go through regularly, or you have a system that automatically generates trades based on some formula. You’ll want to trade Tata Motors because it shows a potential trade as above.

Second, when to buy? The strategy is clear. If the stock broke down below the 200 DMA and stayed there, the whole theory was wrong. (Then the RSI would make a low as well). But if it rebounded, then the trade setup is correct, and you must take the trade.

Note that many trade setups will fail, for factors beyond your control. So when you set up your trade you should know where you’re getting out. The answer here is: any time the stock breaches the 200 DMA, or the RSI goes back to the “oversold” territory. Let’s assume though that this means a 10% stop loss below the current levels, and it will “trail” – that is, as the stock goes up, the trailing stop is moved up to 10% below the high.

On the upside, your exit would be the “overbought” territory, where we might just exit, choose a partial exit strategy or ride a trailing stop. (Exit strategies in another lesson) With a stop loss and an upside target, we’ve also answered when to exit.

(You don’t have to have an upward target, it’s just that this trade had a visible one)

Finally, how much should we put on this trade? If our “exit” is determined by a stop loss, and that stop-loss is 10% below the current level, then you stand to lose 10% on this trade. If, at a portfolio level you will want to lose a maximum of 1% per trade (a figure I use) you cannot invest more than 1/10th your capital. (10% of 1/10 your capital is 1%).

The idea of technical analysis – or indeed, any analysis at a stock or index level – is to answer the four above questions.

Two kinds of people don’t really care about the above questions. The Asset Allocator may not care about which stocks to buy – he might simple choose the stocks that make that index. (His choice of index may just be whatever his benchmark is)

The Single Index trader might choose to trade just one index. For him the “what to buy” is not important. However the “ho
w much” is still important, even though most single instrument traders simply say “100%”.

In subsequent lessons we’ll talk about a few indicators and market macro concepts that help layer an entry or exit strategy.

Do let us know your thoughts. You can mail us at premium@capitalmind.in or post in the Google group hat is for premium members only (Let us know if you haven’t received an invite. Not available for subscribers on the free trial)