India’s Forex Reserves have crossed $300 billion for the first time since December 2011. 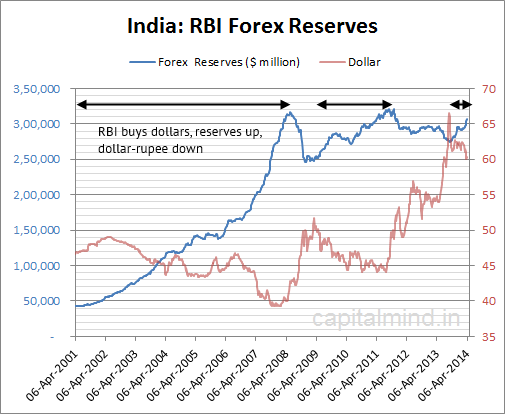 The tone is familiar. RBI had, till 2007, employed a policy of building reserves consistently. In spite of having such a strong buyer in the RBI, the dollar-rupee rate went down – because foreign investors kept pumping money into India. This seems to have happened twice earlier now.

Most recently, since August when the rate spiked up to 68, the RBI tried to get NRI deposits (over $34 billion) which it took over as reserves. 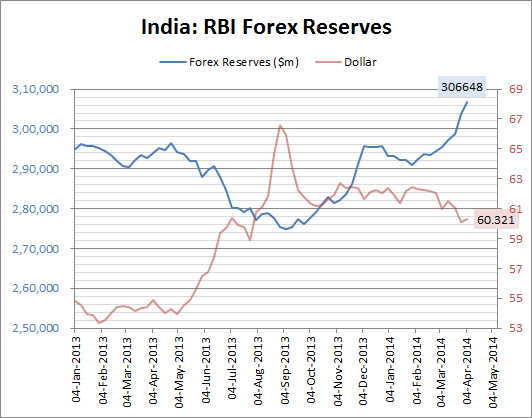 The recent increase in reserves could have two components – RBI’s buying in the market when the dollar went below Rs. 60 to a rupee, and the return of dollars given to oil marketing companies who, in Sep-Nov 2013, were given dollars directly by the RBI as a loan in order to take their buying impact out of the forex market.

However, remember that the $34 billion has to be returned in three years, by November 2017. At that time, the RBI will lose that much reserve as well. The forward obligation has other offsets, and the total amount of dollars RBI owes as “forwards” is $31 billion.

The “actual” reserve, net of this forward obligation, is about $275 billion. While this is still significant, it is not much more than our position in August 2013.

The RBI can hold currencies (Dollars, Euros,Yen) as short term bonds of these nations. Or, it can hold Gold. Or, it could hold a tranche of money as a quota in the IMF, or it could have IMF’s Special Drawing Rights (which is convertible to dollars or yen or such). This has largely been tilted towards currency, but recently we saw the Gold price rise in dollars, and that’s changed things a bit. 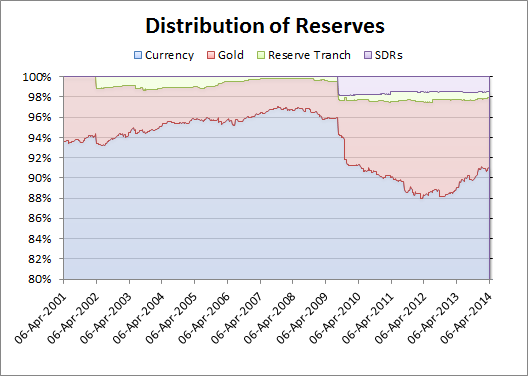 RBI Gold reserves have risen as Gold has recovered, but it remains way below the levels in 2012. 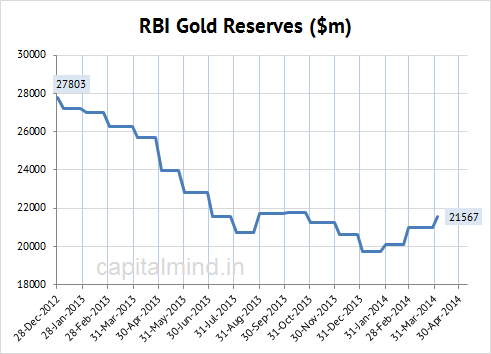 The RBI has added about $31 billion of dollars on the balance sheet. That alone translates to about Rs. 200,000 cr. , or Rs. 2 trillion, of rupees that has been printed to buy these dollars. It also seems like reserves have gone up by $6 bn in the last month, which is effectively a printing of Rs. 36,000 cr.

This money, printed by the RBI, then “multiplies” in the banking system which will lends it out. The increase in overall money supply stokes inflation. The inflationary impact of such an increase in liquidity is between 12 and 24 months.

That means that unless we see banks unable to lend more money (a credit “contraction”) we are going to see inflation increase in the next 1.5 years.

In 2017, when the RBI returns the $34 billion, it will take out Rs. 2 trillion of liquidity from the market. That will cause banks to scramble around looking for rupees, and will result in a mini-crisis unless RBI prints rupees to offset it, and that is undesirable again from an inflationary point of view.

We’ve kicked the can down the road, and will have to deal with the inflationary side effects of building greater reserves. My view is that we should focus on reducing reserves and in the next five years, make the rupee fully convertible and a global reserve currency.