This is not too bad, but it is a definite change in direction from the numbers that were going down till recently. Food is the biggest culprit, but in reality nothing else has really come down much (or gone up). Food has the biggest weight in the index, so it obviously overshadows the others: 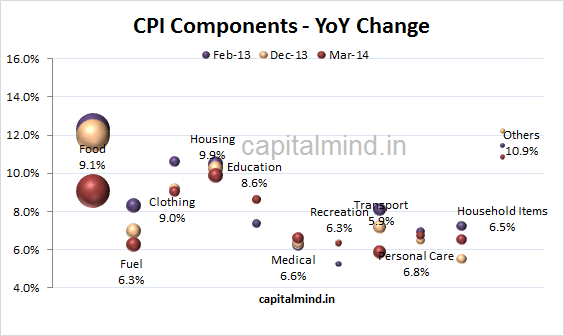 And it’s the villages that hurt the most: Impact: RBI won’t cut rates that easily. Their next rate meeting is in June, and by that time we will:

It’s likely that those will be bigger determinators of policy than anything we are seeing now. However, if the inflation numbers continue upwards, we are going to see no rate cuts, and we might see further rate hikes as well.

(Remember, the RBI policy saw inflation going down till about November and then a reversal upwards to 8% in March next year)