This is going to be a long essay.

RBI Governor Raghuram Rajan has a brilliant explanation of why Inflation is more important to worry about than short-term growth, in a speech he made recently.

First, are we choosing to tackle inflation at the expense of growth? Most people believe there is a short run trade-off between growth and inflation. By raising interest rates, the RBI causes banks to raise rates and thus lowers demand; firms do not borrow as much to invest when rates are higher and individuals stop buying durable goods against credit and, instead, turn to save. Lower demand growth leads to a better match between demand and supply, and thus lower inflation for the goods being produced, but also lower growth.

Relatedly, if lower rates generate higher demand and higher inflation, people may produce more believing that they are getting more revenues, not realizing that high inflation reduces what they can buy out of the revenues. Following the saying, “You can fool all the people some of the time”, bursts of inflation can generate growth for some time. Thus in the short run, the argument goes, higher inflation leads to higher growth.

But as the public gets used to the higher level of inflation, the only way to fool the public again is to generate yet higher inflation. The result is an inflationary spiral which creates tremendous costs for the public. Therefore, economists have argued – and a number of Nobel prizes have been given for the ideas contained in the previous paragraphs – that the best way for the central bank to generate growth in the long run is for it to bring down inflation. Sooner or later, the public always understands what the central bank is doing, whether for the good or for the bad. And if the public starts expecting that inflation will stay low, the central bank can cut interest rates significantly, thus encouraging demand and growth. Indeed, the reason the Malaysian Central Bank can keep rates low today to foster growth is because it has fought the battle against inflation and convinced its citizens that, if need be, it will smote the inflationary beast again if it rears its head.

Put differently, in order to generate sustainable growth, we have to fight inflation first. Let me also add that greater public faith that inflation will be low will add stability to our currency, and prevent the kind of gyrations we saw last summer. Exchange rate stability is centrally in business interests.

If we have to bring down inflation, we have to start today. We cannot wait till the public’s expectations of inflation get more entrenched, and the inflationary spiral gains momentum. This is why we have raised interest rates 3 times since September.

I feel an enormous sense of relief. In this blog, I have always been arguing, for over three years now, that inflation is a beat we have to tame first. Growth will slow, but that is how it is supposed to be, because the growth we had was all inflation and no productions. 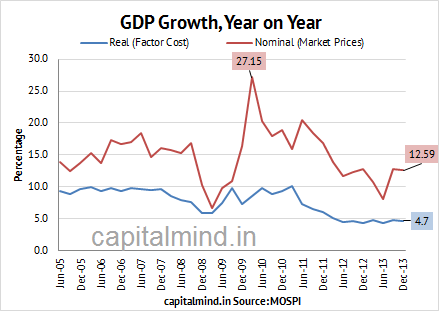 The GDP Deflator, a measure of how inflation impacts you is calculated by dividing the Nominal GDP by Real GDP. The change in this measure is an indicator of inflation. For us this is the chart: You’ll notice we are the highest levels of inflation as measured by the GDP Deflator, since 2011, and rising! We’ve had high inflation, and effectively, slowing GDP growth even in nominal terms. But if we were to tackle inflation, and the expectations of inflation, we will get ourselves in better shape faster.

If people believe we are serious about inflation, and their expectations of inflation start coming down, inflation will also come down. Of course, many people form expectations simply by extrapolating the most recent or most salient experience they have. So we also need to take advantage of the current episode of food price disinflation to bring down expectations – yet another reason for acting now.

What Rajan is telling you is:

(And I totally agree with him. I believe people don’t bother investing because they get those crazy salary hikes every year)

Another thing Rajan says is that he won’t do a Volcker because we’re not exactly ready for the ramifications of a crisis, being an emerging economy.

If we think inflation is so important, why don’t we “do a Volcker” and try and bring down inflation quickly by raising rates sky high? Of course, if we do raise policy rates substantially, banks will also have to raise rates to match us. While this may lead to a collapse in demand and bring inflation down quickly, it will cause significant damage to the economy – remember the severe recession Volcker’s Fed brought about and the Savings and Loan Crisis that followed? A developing country is not in the same resilient position as the United States. Rather than administer shock therapy to a weak economy, the RBI prefers to dis-inflate over time rather than abruptly, while being prepared to do what is necessary if the economy deviates from the projected inflation path. As of now, we believe the rate is appropriately set.

This is where I disagree. I believe we are better served by shock therapy because we recover faster. It has been a long time when inflation has seeped into our thinking. We engineer contracts with 10% increases every year. It’s horrible, and it’s entrenched. And I’m definitely not the only guy who knows this.

And no, an RBI governor cannot openly agree with me. He cannot say he will do a Volcker, because that will cause people to panic. He has to do a Volcker, while denying this is precisely what Volcker did, because it will cause fears of a massive recession and in turn create political turmoil of the immature sort that brings jokers into politics. (And that is as bad as hyperinflation).

Whenever I hear “we are not ready” or words to that effect (like what Rajan has said) it causes me to to stop and say: WE ARE READY.

No, really. Rajiv Gandhi said we were not ready for a free media in the 80s. He was wrong. We weren’t ready for liberalization ever. But we were. We are not ready for a free rupee, but we are. (or, at least, we’re facing the consequences of it anyhow) We have always been resilient, more resilient than ever. This mollycoddling of our people will be the bane of us, the factor that prevents us from rapid growth.

If the shock therapy cannot be administered when are strong (and we are strong now, even at +4.7% GDP growth), then we will get it when we least desire it. But let’s leave that argument for another day.

First, we don’t believe the primary factor holding back investment today is high interest rates. Second, even i
f we cut rates, we don’t believe banks, which are paying higher deposit rates, will cut their lending rates. The reason is that the depositor, given her high inflationary expectations, will not settle for less than the rates banks are paying her. Inflation is placing a floor on deposit rates, and thus on lending rates.

Currently, therefore, we do not believe the policy rate is at a level where it can affect demand, one way or the other. We do believe, however, that as inflation comes down because of the weak economy and strong food production, the policy rate will become a stronger influence on bank interest rate setting, and will start influencing demand.

This is okay at a macro level. But the devil is in the details. The transmission system is broken.

If deposit rates were the controlling factor, then banks wouldn’t have all that much money in CASA (Current/Savings accounts). To increase interest rate transmission we actually need more banks, more competition. We need to allow people to use liquid funds as a payment mechanism (which currently gives you 9%!). This will make banks compete for money.

We need to allow people to transfer loans easily through a common documentation system; imagine a place where all your loan documents are scanned and stored, and you can transfer your loan at the drop of a hat. For loans longer than 5 years, no prepayment penalties. Banks will then INSTANTLY respond to interest rate changes. Banks reduce deposit rates when they have to cut lending rates; and they will only cut lending rates to existing customers if they are forced to. We have to force them to.

Secondly, these piddly 0.25% rate changes do nothing. In fact banks haven’t modified rates even though RBI has hiked rates three times, because their spreads were enormous (that is, they could borrow through CASA at lower than the RBI rates, and lend out at much higher). A small contraction in spreads hasn’t hurt them; and the range is still very large. even another 0.5% will not hurt, in my opinion; even if RBI raises rates to 8.5%, banks are unlikely to transmit that onwards.

While Rajan has focussed on controlling inflation through rates, the metric requires the transmission of policy to be working. In order for the transmission to work, we need rates to be at the point where it hurts, but not too much.

What seems to have happened recently is that short term rates have gone to 9%, despite no real rate changes from the RBI. There is some liquidity pressure and also the locking in of term-repos have forced rates up.

Sorry for the long essay. There’s another post based on that speech, so I’m not yet done. But for now, toodles.