RBI’s Raghuram Rajan has described why food inflation continues to haunt our inflation expectations over the last few years. Here’s what he says, distilled into the few charts he presented.

Food has contributed to more than 50% of Inflation

While food is 47.6% of the Consumer Price Index, it has been responsible for more than 50% of the inflation we have seen. 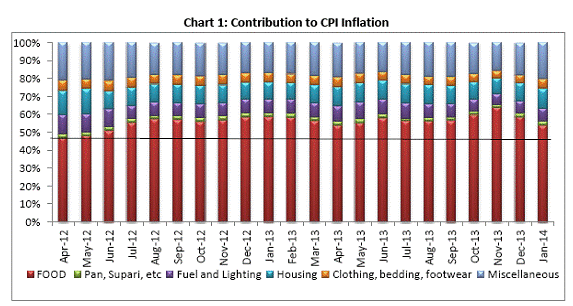 If the government tells you we’ll buy your produce at a higher price next year, you will obviously find the market price will only go up, even if you produce more of that item. Effectively, the government has exaggerated the “demand” – and what it buys rots in warehouses for the most part. 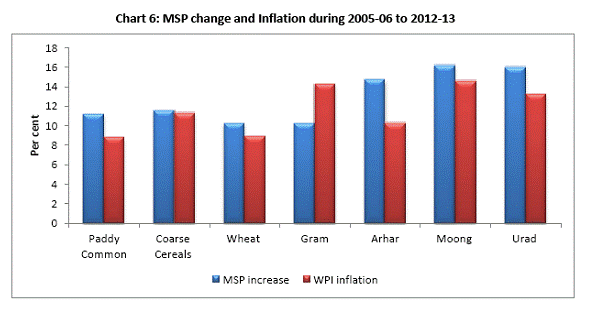 When your labourers demand higher wages, you have to price goods higher. The rise in rural wages has for the most part contributed to cost inflation in farms. Look at the bottom part of the charts: In all states but Andhra Pradesh, the inflation in wages has fuelled more than half of the total increase and has just by itself increased total costs by 10%. (The rest, as you can see, have much lower impact) 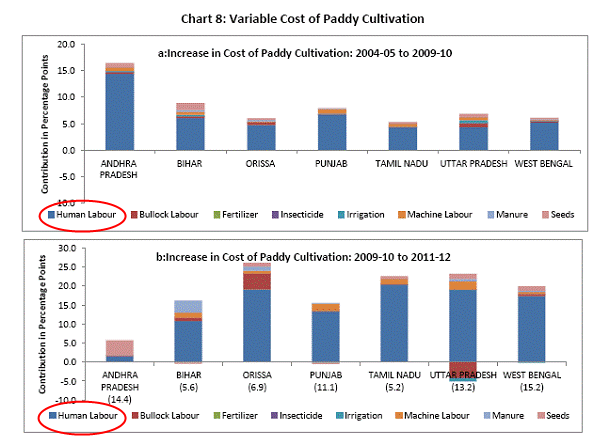 And The Culprit for Rural Wages? NREGA 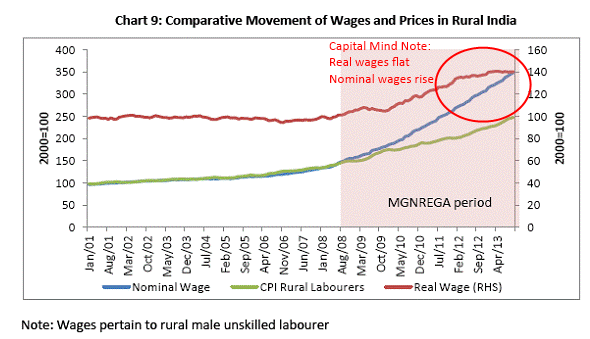 Note that initially “real” wages – that is, nominal wage rises adjusted for inflation – rose. Inflation takes some time to work in after wage increases. So when inflation sustained at a higher rate, norminal wages continued to go up but you can see that the “real” wage flattened out since 2012.

In short, all the extra money workers are making is being used to pay for more expensive items they have to buy.

And Agriculture Is A Smaller Employer Now

Farm labour has started to shrink since 2004-05. Construction and Services are more exciting opportunities, it seems. It’s Also That We Lent Them More Money

Agricultural Lending went up big time since 2000. And that’s fuelled wages, probably. It’s kinda tapering off now as a percentage of GDP. (But as an absolute figure its still growing, by the way). 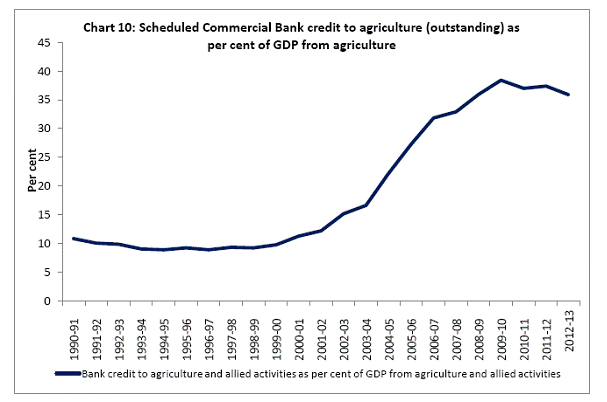 What We Need To Do

In sum then, when we examine food inflation, a substantial portion stems from an increase in food production costs, primarily rural wage inflation. Some of that is an increase in real wages, needed to attract labour to agriculture, away from construction, education, household work, or MGNREGA. If, however, wages elsewhere also go up, the necessary shift in relative wages to keep agricultural work attractive will not take place, and we will continue to have a wage spiral. Also, some of the agricultural wage growth may be because of more liquidity flowing into rural areas. Somewhat paradoxically, to contain food inflation and get a strong increase in food production, we need to

Note that of these steps, monetary policy has a direct role in (i) and (ii) by slowing the demand for labour and by anchoring inflation expectations and thereby moderating wage bargaining.

This is one of the most powerful messages I’ve seen in the analysis of food inflation. I hope we all listen and demand this of our politicians in these elections.