The PSU-ETF is here. You’re wondering:

WTF is a PSU-ETF? Don’t we have enough Three Letter Acronyms already?

I hate complicated stuff. I mean I love complicated stuff, what with my having some kind of math background and loving numbers and the associated textual snootiness that comes from saying phrases like yield curves and statistical arbitrage and intensive fiscal stimumus withdrawals. But when its real money on the table, you gotta be able to tell the story easy.
The easy part of the story is that the government gets to sell shares. Slightly less easy is who is buying them.
First, read: What are Exchange Traded Funds?
Now, you know that an ETF is just a mutual fund, whose units are listed on an exchange. There is a new ETF, that is called the Goldman Sachs CPSE-ETF, which will invest only in a few stocks contained in a CPSE Index. These stocks are all Public Sector Enterprises, and the government owns a big stake. 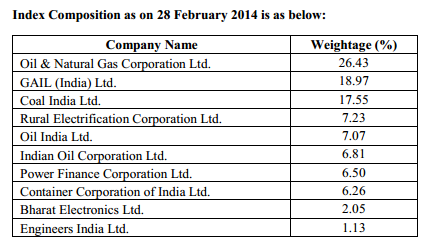 (If you can’t read the image,  the stocks are ONGC, GAIL, Coal India, Oil India, REC, PFC, IOC, Container Corp, Bharat Electronics, and Engineers India).
The CPSE Index will contain these stocks and the ETF will have investments in the exact above proportion. Each ETF unit will be 1/100th of the CSPE Index; meaning, if the CPSE Index is at 1000, then each ETF unit will be approximately Rs. 10.
(Give or take; dividends will increase the ETF unit’s value higher than the index, and the ETF charges a management fee which will reduce each unit’s value. So there will be a “tracking error”, but I expect it to be in your favour in the longer term)

Currently there is no such ETF in the market. It’s new. So you can buy through a “fund offer” which involves doing a paper purchase, going through an intermediary like FundsIndia, or buying directly from Goldman at gsamonline.in.
Why buy at the NFO? Because the money collected will go to buy stocks from the government in the above proportion, but at a 5% discount to the market price. This market price is the average full day volume weighted average price of each share on the NFO days (March 19 to March 21, 2014).
The ETF will list in April. I don’t really know when so I’m taking an arbitrary date of April 11 to explain.

You can sell after April 11.

If you are a retail investor (individual putting in less than 2 lakh), and you buy at the NFO (not from the market ), and hold for one year then you get Loyalty Units. One free unit for every 15 units you hold. If you sell in the middle, then it’s based on the lowest holding in the year.

I like the stocks. I like the concept of getting about 12% discount overall. This could be a good idea for the kids education fund which I don’t need to touch for a long time. They’re very big on power and energy, which I think will drive a lot of our future.
However, the market could crash considerably, since and it may be more useful to just buy the same stocks over time. I would for instance totally avoid ONGC. Last year, the government sold ONGC shares in a public offer in March and then put a large part of the under-recovery costs on ONGC later. (More than 49,000 cr. was paid by ONGC to the downstream marketing companies of IOC, BPCL and HPCL which lost money selling fuel at pumps at lower than cost prices)
And this is the same with GAIL, and PFC and REC. The problems in this sector can get worse before they get better. Even if a certain political person becomes PM, I don’t see that changing in the near term. But it might just make sense to quit overanalyzing and allocate a small amount of money to the fund anyhow.
I think this is an interesting move by the government and could form the base of further disinvestment (just add stocks to the index!) The discounts are attractive for retail investors. However, liquidity might be a concern if you need to sell and there aren’t enough buyers at that time in the market. And once the government has sold its shares, it might force losses into the hands of these very companies. Take your call.