Reader and friend Haresh Nagpal writes on twitter about the proliferation of fake SMS’s that are pump and dump schemes. He mentions an SMS like this: And then, this happens: 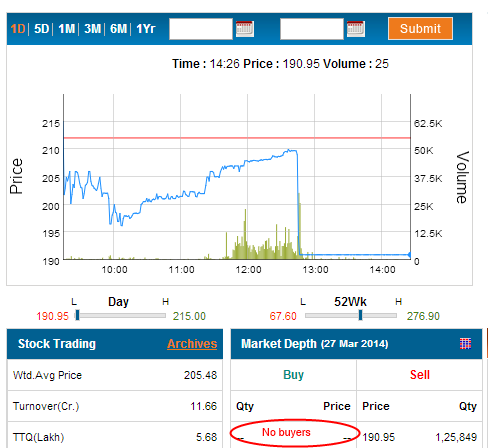 How They Sucker You

You’ve probably guessed by now. Someone buys a chunk of shares in the market. Then they spread rumours that there is a big buyer, or there’s a big piece of news coming soon that will take the stock up. And then, when the retail suckers buy in, they dump the stock and it crashes down because the last big buyer was…the retail sucker.

What Can You Do?

The correct way to think of it is: What were you thinking? Are you buying stocks on the basis of an SMS? Or a tip by your broker? Or a hushed whisper by a friend?

Do not believe such tips.

People who say they “know” stuff often are taken for a ride themselves. Even the person who sends an SMS might have received the tip from someone else.

But They Are Right Sometimes!

And therein lies the twist. These operators do get a call right once in a while. The last whole month has seen small caps flying! If you bought Mayur Uniquoters on Feb 3, at Rs. 348, you would have nearly doubled your money now with the stock above Rs. 600 today (March 27). Even Patidar has gone from Rs. 150 to Rs. 220 in 2014. In such a situation, is a 10% move really difficult to believe?

People who believe they have missed a rally will want to get in, somehow. They will buy the tips because of the standard greed-and-fear theory.

The greed of making quick money.

The fear of not being left behind.

It’s this that drives us to do stuff that defies rational logic. No one wants to invest on the basis of an SMS, and the hindsight will embarass anyone. However, the heat of the moment, the fact that an SMS was right the last three times when you didn’t buy, the fact that other people seem to be making money while you sit on the sidelines….that drives people to stupidity.

So The Answer Is…

Do not believe such tips.

If I appear to sympathise, think again. No matter how crazy the situation you are never justified for doing the wrong thing. If you break a red light because everyone else broke a red light, and you get into a side-on accident, are you going to defend yourself saying so what, everyone else was doing it too?

(I know this is standard operating procedure in India. We live in such a time. But you will agree that this is not a tenable argument)

Aside: How Can SEBI stop this?

No one can stop people from being stupid. However, sending such misleading text messages is illegal in SEBI’s laws, and there needs to be a mechanism to enforce the law.

It will cost a lot of money but in my view, if SEBI were to investigate, fine heavily and along with the CBI, jail such fraudsters, they would go a long way in preventing further instances. Of course, you can never really prove certain cases, but I’m sure these guys slip up in some way or the other, leaving a trail behind that shows their manipulation.

If SEBI would take this seriously, we would have more people believe in markets…right now, the fraudsters get away scot free. People don’t trust people, because people are frauds. And in that mistrust lies the woes of the financial industry.

Having said that it would be very bad to pin this on insufficient regulation. You have the freedom to think, and you have the freedom to listen to other people or ignore their advice. Any mistakes are entirely yours; for having invested in a stock without knowing why, for listening to advice that came on SMS. And therefore, the entire responsibility of that loss is yours.

Don’t be a sucker.