The RBI has sold $1.93 billion in the forex spot market in January 2014, reveals their monthly bulletin for March. This has been offset partially by a $750 million reversal of forward sales, resulting in a NET sale of $1.1 billion in a volatile month. As you can see it’s the first time the RBI has net sold dollars since September.

FCNR Swap Party Over, Back To Selling Dollars

All of this is because in September 2013, Rajan announced a massive FCNR swap program. Banks that brought in dollar deposits (repayable in dollars) could swap out the exchange rate risk on the principal amount for a rupee cost of 3.5%. Dollars would be converted to rupees on day 1 at rate X, and 3 years later the banks needed to pay X plus 3.5% interest per year to get back the same amount of dollars.

Effectively, the obligation of the RBI to sell dollars to the banks at a later date reflects as a “forward sale”. Which is why you see massive dollar sales in October and November in the blue bars, but equivalent buys in the red bars (which are “spot” sales since the first leg is converted immediately and dollars are bought by the RBI for rupees).

The FCNR Swap was a “party” for banks. They could promise 5.5% to customers in dollar terms for three years. They would convert to rupees and effectively pay 5.5% plus 3.5% (the swap cost) as interest, money that is effectively locked in for three years. Three year FDs, even for resident Indians, run at 9.5% to 10% in most banks.

Now that FCNR swap has expired – it did so in the first week of December. To protect the rupee, we saw the RBI go back to selling dollars.

On a cumulative basis per financial year, including forwards, we have the second largest net sales of dollars since 2008. 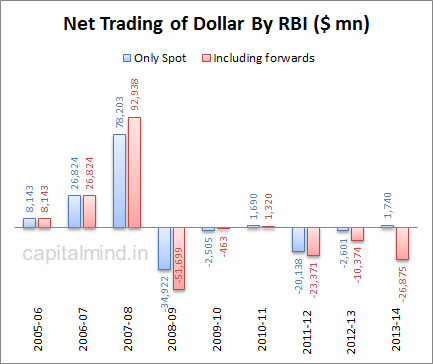 (Note: these are only annual flows – that is, the amount actually traded in the financial year)

The Rupee Slid to 63

The RBI’s sold in Jan, when the rupee went all the way to 63 before coming back down. The point at which it reversed must have been where RBI sold, telling us that 63 was their no-go point. 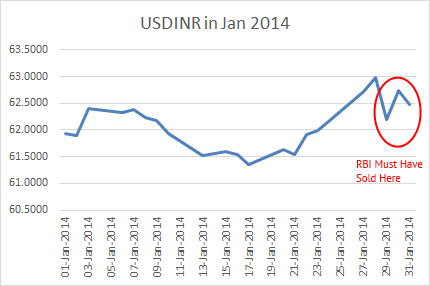 And Now, The Other Side

With the rupee moving hugely up in the last few days and going below Rs. 61, we are likely to be having a different problem – that the rupee appreciates too much. It’s likely that at some point the RBI steps in to buy dollars.

(I would not recommend that. To buy dollars we’ll print rupees. We print more rupees, we increase money supply and that will cause inflation in the future. Not worth it. We have way more reserves that required, as net of dollar forwards, the RBI owns about $260 bn.)

We’re actually in a precarious situation. If the RBI has to act when the market wiggles just a little bit here and there, it doesn’t really seem like a solid market. I wish the RBI would stop manipulating this market and let the exchange rate decide for itself where it must end up.