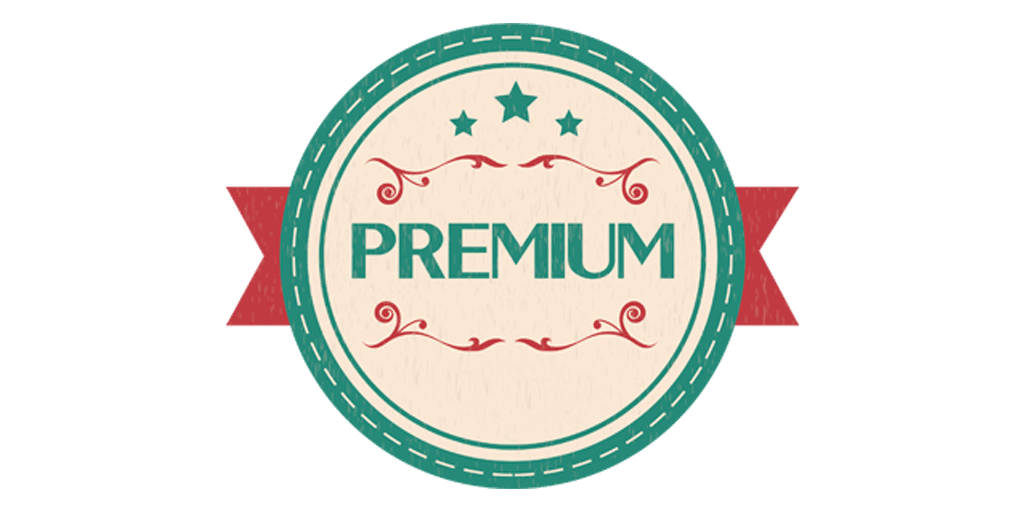 This is a Premium Post for Capital Mind Premium Subscribers, sent on March 9, 2014.
Volatility is part of all markets. Prices will fluctuate because they are supposed to. As investors it is not in our best interest to demand the lack of volatility, or to demand that prices should only go in one direction.
Oh, people have tried. The Karachi Stock Exchange, in a moment of complete lunacy, declared in August 2008 that stock prices of their top stocks could not close lower. This came after people were furious that stock prices were pummelled down, and threw stones at the stock exchange building. In that fear, a floor was set for each stock at a KSE 100 index level of 9,144. The floor then became a ceiling, as stocks refused to go up either – and the index remained there for four months. When the ban was removed in December 2008, the market fell continuously till the KSE 100 was at the 5,000 levels before it recovered.

(Read Ajay Shah’s excellent note about what led to the situation and how it panned out)
A similar experience has been noted even when the US announced rules that disallowed short positions in financial stocks, or in other countries where price limits were set arbitrarily in one direction.
The point is: Prices will fluctuate, and if you stop them from fluctuating, they will react violently, eventually.
As an option buyer or seller, you are a highly leveraged player in the market which makes you big losses or wins when the market moves fast. While you cannot anticipate every move in the market, players will attempt to price options according to the volatility they expect. Sometimes, this volatility is too much and some other times, too less.

When you see an option price, you might not immediately understand how volatile the options market is expecting the underlying stock to be.
We can get this from the volatility in the At the Money Straddle. The straddle is simply the call premium and the put premium at the strike price closest to the price of the stock, added up. Effectively, if you bought the straddle, you paid the call and put premium, and you will benefit if the stock more than the “call+put premium” from the strike price.
For instance, here is the option chain for Nifty on Friday, March 7, 2014.

The current price is 6526 and for all practical purposes the At the Money Straddle is at 6500. The circles indicate current implied volatilities (13% to 16%).
Note: there is an option at 6550, but this option is thinly traded (as are all the “50s” options) so we’ll take the trustworthy volumes instead.
The Straddle Price for the 6500 call is:

If you consider that option writers tend to rule the market – this is not always true but let’s assume they are more informed – then they are expecting the market to stay between 6317 and 6682 till expiry.
Put another way, the implied move for the Nifty, over the next three weeks till expiry is the range between 6317 and 6682. Effectively, this is about a 3% drop down from the current price of 6526, or a 3% increase.
In three weeks, the market is expected to move at most 3% in either direction. We call this the Straddle Range, or the Implied Move.

If we were to derive the straddle range for the Nifty over a long time, you will notice that the range will converge to zero at the expiry – that’s because as we get closer to expiry the time value in the options reduces because the time itself reduces. (The time value is a function of the expected volatility and time remaining, among other things). 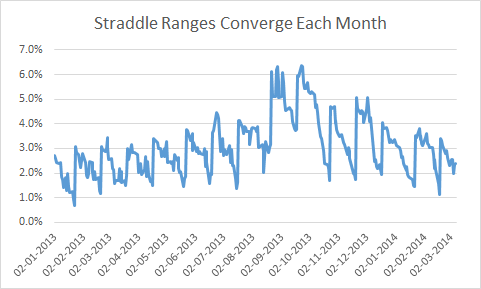 So how do we know if the straddle range today is a low because of low expected volatility, or because there’s little time left to expiry? The answer lies in ensuring we get the “volatility” part of the data right. Let’s make two adjustments:

We get a smoother graph that gives us an idea of high or low implied moves: Straddle Ranges and the VIX

While the VIX will work as an alternative for the Nifty, the VIX has some flaws.
The VIX tends to get very jittery in up-moves. For example, when the Nifty moved up 2% on Friday, we saw the VIX jump 2% to about 15, but the straddle itself hadn’t moved to much higher levels. In fact the VIX fell rapidly in September 2013 when the market moved up after Rajan came in; however the straddle range showed continued high expected volatility. (Essentially, you coudln’t profit easily buying straddles even though the VIX fell and actual volatility rose) 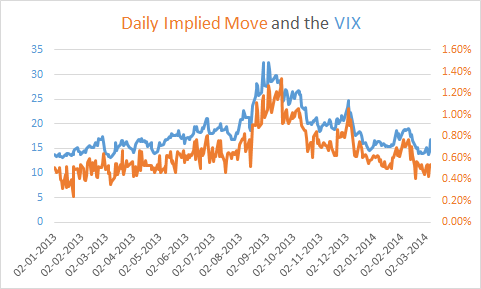 Secondly, the VIX is only available for the Nifty. One of the reasons it is not available for other stocks or indexes is that the options on those indexes aren’t liquid enough for the calculation. Remember, the VIX takes seven strikes (three OTM calls, three OTM puts and the ATM strike) and only the Nifty seems to have liquidity on this range of strike prices.
However, we might want to see which stocks have very high (or low) implied moves and the straddle – which is just one strike – is liquid on many stocks. Using the implied move or straddle range on these stocks is a good proxy for the volatility expected.

When options become cheap, people expect less volatility. The straddle range will be lower.
But as traders know, low volatility is a short term thing. Eventually volatility comes back. This is what has been happening in the last few days – while we had a big 3% month in February, and the first week of March has already seen a 4% move, we have expectations of only another 3% in the rest of the month.
Basically the move expected, on a daily basis, is just 0.60%. In a situation like this when:

It is useful to buy straddles.
The converse could also be true. Infosys moves a lot after results. The implied move now is so large before the result date, that the straddle might actually be profitable to trade short! Of course, this strategy does have large loss potential if Infosys moves even more than that wide range.

The implied move straddle range can be used to create a vertical spread to trade a stock. So if the Infy Range is 4%, and the trend is down, then you can buy an At the Money Put option, and sell a Put option 4% below to capture the range and reduce risk.
Event risk trades: A few days before a key event, you might find that implied volatilities might rapidly increase. For instance, on the Bank Nifty the day before RBI’s quarterly policy meetings (when interest rate changes are announced). Or, before election results. You might find that just as upside risk was underpriced in options in the 2009 elections, downside risk is underpriced in 2014 – in which case, puts may be a better buy.
One way to trade events is to do calendar straddle spreads – that is, sell an option straddle in the current month, and buy a corresponding option straddle in a later month. If the event is useless – that is, it causes no volatility, volatility on both options will fall but due to the higher time value on the longer term option, you will find that longer term option losses will come close to the current month option . If the event causes large volatility, then you will lose in the current month, but gain in the later month. 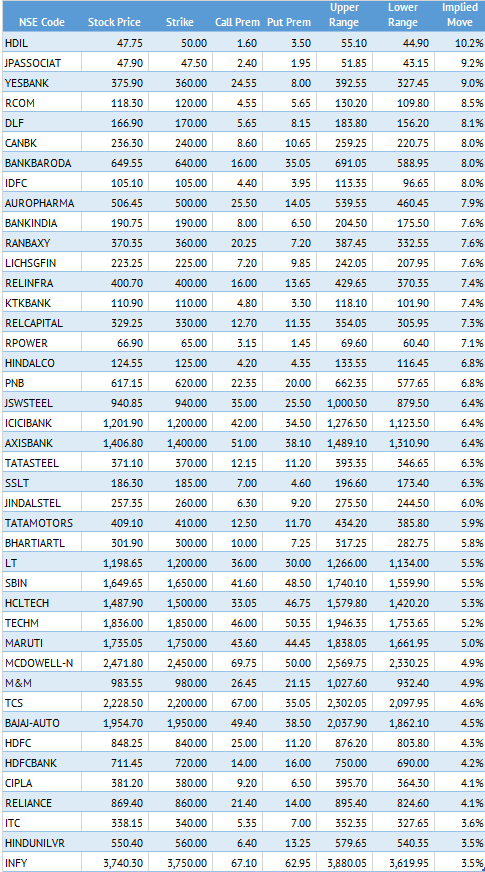 Note: We have attempted to remove stocks with less than 100 contracts traded on either put or call sides.
Implied Move means the move between today and Thursday, March 27, 2014.

This is new to us as well. We discovered this while testing a system of straddle ranges, and on last Monday, we had bought the 6300 straddle (the Nifty was around 6300 then) for Rs. 160 all together. On friday, that straddle was at Rs. 290, for a fairly quick profit.
(On that note: we exited half of the calls to book in some gains.)
We will initiate a fresh trade on Monday, to buy a straddle on the Nifty at the 6500 strike. The idea is simple: we believe the implied volatility is still lower than we believe will last for a few more days. The idea is to take a trade with either 100 or 150 Nifty, or a similar amount in Bank Nifty, which has been even more volatile.
Implied moves through straddle ranges have their utility, especially when they are at outliers. But there are hardly any data providers in India that will give you this information. Capital Mind Premium will bring it to you in a capsule, however the development of the code has taken us longer than we thought!
(Do tell us at premium@capitalmind.in what kind of options data you would like to see in that capsule)