This is a premium post for Capital Mind Premium subscribers.

How do you setup option positions for elections? We saw this question in the premium group today and we were hoping to expand on certain option strategies; here we go!

We’re going to take the political position of “Oh, we don’t know what will happen”. Which means we have to evaluate What-Ifs.

What we expect is that in case we’re Modi-fied, markets will go up, and in the other two cases, the market sees a 15% down move within a few days. Largely because we’ve run up recently. However the probability of the first is very high at the moment, so let’s not bet on the “falling down” bit just yet.

The election results will impact markets.

The lack of a solid new government will obviously break this thinking. Volatility, therefore is the order of the day, especially if we are in “Shifty Eyes” or “Whoa”.

What happened in the last few elections?

Given the sheer lack of enough data points it is very dangerous to assume that markets will only go up or down big time on elections. Plus, remember that markets were not that big in 2004, and futures and options weren’t as liquid at the time, so we don’t have enough derivatives information to conclude much.

However, considering the fact that this time, it’s a tough and go for the economy, we’ll see markets react appropriately. So, what positions can we take to benefit from market moves?

Worldwide, markets bottomed in March 2009. Then the markets took a turn for the better, and in India, they went up nearly 30% before election results were due in May. There were low expectations – after all, there was a disaster in the last year, inflation went to very high numbers, the world crashed down, the economy was stagnant and so on.

However, voters chose the Congress by a number that wouldn’t require the support of the Left parties, which took the market up by over 15% in one single day (and required markets to be shut because of circuit limits).

Options data for a few days before elections showed markets expecting moves of over 10%, with the 3600 straddle at Rs. 320 on the friday before the results (which came out on Sunday). However, what happened afterwards was a blowout. 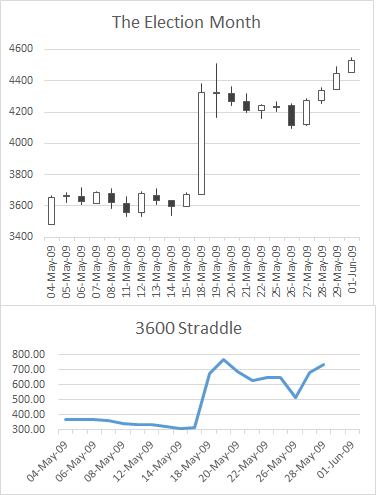 This was crazy but it was happening. The markets simply did not predict the volatility, despite the obviously large stakes.

The 3600 straddle at that time was quoting at a very high implied volatility at the time, even though this data has been calculated at current risk-free interest rates of 10%. The call and put IVs went up towards elections, calls going up more than puts. 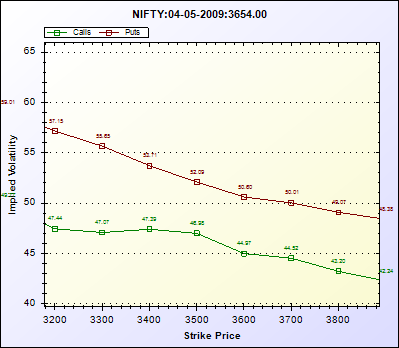 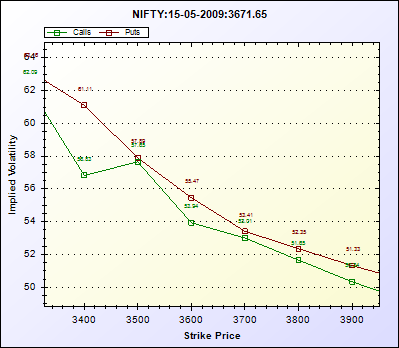 Let’s look at the IV situation today. For the May 2014 expiry, we have some traded information and here’s where we are with respect to Implied Volatilities. 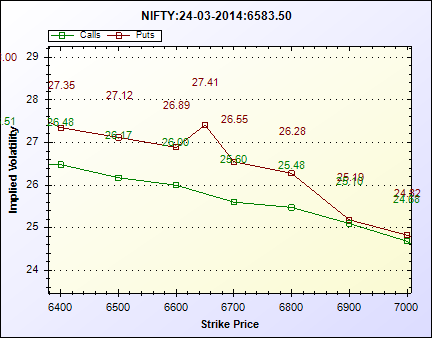 This is very low, but that’s not the real point.

(Note: this is a test tool we have developed to calculate IVs for any date. We will soon make this available to all subscribers!)

As you can see, IVs of puts are still higher, however both still are low for a massive upmove. (10% in a day is much greater than the 2% a month expected)

Option Strategies To Use

We will cover some of these in the webinar later this week. One of the simplest ways to trade options for this event is to buy a straddle. Our only data point shows success (the 3600 straddle doubled!), but one swallow does not make a summer. A Straddle today costs around Rs. 600, which is a 10% move likelihood over the next two months.

To find out how much a straddle costs, check this page, which has data for all calls on the left and puts on the right. Just add the “LTP” – or last traded price – numbers for the strike price closest to the current market price. Remember to change the expiry date to May 2014.

A straddle will only benefit if the Index moves 10% in this much time. But that’s just to break even! This is not very profitable unless you have a very large move.

Could we go short a straddle? The reward is likely to be larger here, as a straddle will converge to lower values. However, this strategy has unlimited risk and we need to limit that risk. The same applies with strangles (where the strike prices are different).

Let’s consider a Condor. The strateg
y is a combination of a long strangle and even wider short strangle. Consider the following positions with May 2014 options:

(Assuming quantity of 100 shares of Nifty for all legs.)

This has a payoff that loses you money unless the Nifty moves big time. Like you see:

It simply doesn’t make sense to do this in normal times, but in a large event if you expect a 10% move, you could build this strategy. You lose upto Rs. 20,000. You make only Rs. 10,000 for a win. But the idea is that it’s more probably you will see a big move, so it makes up.

Such a strategy is a defined max risk and defined max reward situation; and is probably better built later in April to avoid the time value destruction.

This is called a Condor because the payoff sorta looks like one.

However the range of operation is wide. Profits are only less than 6100 or higher than 6900.

As you can see, the max loss is higher, but we can work with a narrower band (6350 to 6850) This position benefits from a large move, but how much?

Which one should we take?

We should wait till April 1. That’s when RBI releases its Credit Policy and Options could change based on that data. We don’t expect any fireworks, or the chances of actually announcing big things because of election rules. However, the volatility premiums currently contain the element of risk of a big move due to an RBI action, and we need to eliminate that while trading in for elections.

We can get to similar positions in other indexes, especially the Bank Nifty. In stocks we should be careful in only taking such positions with ultra-volatile stocks, but at the same time the butterfly or condor should make sense in terms of risk/reward.

Other events next month involve results – nearly every stock will announce results before elections and option positions like butterflies might still work, even earlier than the expected end-date.

A Recap on Options.

Notes on the earlier moves: We bought a very small quantity of the 6500 straddle and ended up losing about Rs. 60 on it out of the total premium of Rs. 160, as we covered the calls today at Rs. 102. The puts remain in place and don’t have much value, but we’ll leave it in there.

We also bought extra 6500 puts at about Rs. 60, which have only Rs. 10 left in them. We’ll roll them over to April as our indicators still expect a downmove.

This has been a rough month on Index options. We made some money on an earlier straddle (6300), we lost about half that on the 6500 straddle, and we are losing that much on open put options. However, stocks have done well in the portfolio and will readjust.

Note: We’re not actively speaking of positions that are very short term because of the time it takes to put in the information into a consumable format. We will evolve a simpler, shorter table format for those positions where we don’t need to explain all that much.

We can still continue to trade directionally through Option Spreads or naked options. We could use straddles and strangles as well. However, these are not looking to be very useful at this time.

The one negative about Condors and Butterflies is that they involve losing more money when you lose, than the money you make when you win. But they are taken only when you believe strongly that the probability of them moving a lot is very high. Essentially you bet on 10%+ moves, and elections certainly seems like a viable candidate for such a move.