The IPO of King, the maker of the popular game “Candy Crush” has listed in the US, but fell about 15% from the IPO price of $22.5. In the US, shares get sold through merchant bankers who then sell them onward to customers. (Unlike India where anyone can bid and get allocation proportionately) The shares then list, and the initial buyers get to sell and realize profits. 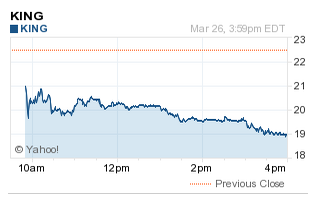 The King stock closed at $19, which was a 15% drop. The IPO was for 22.5 million shares, of which 15 million were issued by King, and the rest were sales by earlier investors. That means King raised about $337 million in the IPO, and the remaining (around $160 million) was received by its investors.

King made $568 million in profit in 2013, with $1.9Bn in revenues. The valuation of the company is around $6 billion, to make for one of the lowest P/Es I’ve seen. However the fear is that like Zynga, King might be a one-trick-pony, cashing in only on the ludicrously famous Candy Crush Saga, played by people worldwide.

The Facebook, Twitter and LinkedIn IPOs have been successful (though Facebook scared the daylights out of people by subsequently falling more than 50%). Zynga, another game maker, has had a rough ride, and even that was down 5% on opening day, and has since lost more than 60%.

It is way too early to call the end of tech IPOs, but gaming companies need to be able to prove they can sustain revenue over time through multiple titles before they get rich valuations from investors. I hope King can demonstrate that, and if it does, it will be a great investment.