While the Nifty is near its all time highs, it’s just an index of a bunch of stocks. How many of those are close to their all time highs?

We introduce the Capital Mind All Time High indicator (ATH) which maps this over time. 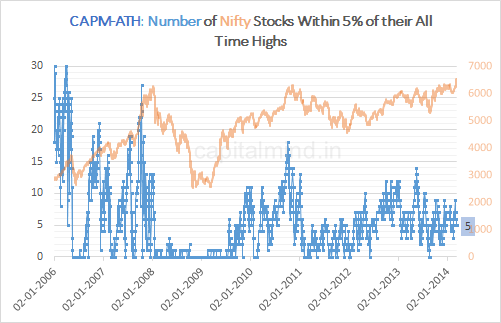 As you can see the number of stocks close to all time highs peaked at 27 in October 2007, but the number started to fall as the Nifty went higher and higher in Jan 2008, after which there was a massive crash.

Then, in 2010 we saw the indicator peak a couple weeks before the eventual high and the index retreated. Even here it was a low number of just 18 stocks that peaked this indicator.

And today we have just 5 stocks meeting this criterion. This indicates two things:

In a low-breadth situation, the index runs out of gas, especially if it has been running on the fuel of liquidity rather than a genuine interest in the fundamentals.

HT to @ap_pune for bringing this up on twitter.

Note: In Capital Mind Premium, we have a much more detailed article sent yesterday about this indicator and a couple other indicators we have built from the index data.