After a decent Manufacturing PMI, the PMI for Services for Jan 2014 has come in at 48.3 (after a low 46.7 in December). Remember, a PMI value below 50 is contraction and above 50 is expansion.

This takes the composite PMI to 49.6 (from 48.1 in Dec) which indicates the economy is probably not out of the woods yet and the economy is still contracting (at least according to the PMI). 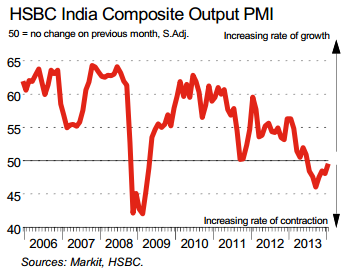 Unfortunately, prices continued to increase. From their press release:

“Service sector activity remains weak and broad based, although Post &

Telecommunication led the softening in January. Meanwhile inflation pressures firmed, with input prices rising at a faster pace. Despite the weak growth backdrop, the RBI has to stick to its hawkish bias to get inflation under control and through this eventually pave the way for a recovery in economic activity."

Impact: Obviously, like all irrational markets, stocks went up.

What they are telling you is loud and clear:

What is standing between India and Growth is only one thing: Inflation.