Eager for a successful launch, RBI officials are making frequent phone calls to lenders encouraging them to trade, most overtly during a meeting held before the launch, according to several senior bankers who are in touch with the central bank.

Banks were told Rajan himself would be monitoring which banks were placing orders, scrutinising information in management information systems (MIS) or trading records, the sources said.

"RBI actually called people and threatened people saying that these MIS will go to governor, and the volumes and participation," said a chief dealer with a state-owned bank.

"We have to close our eyes and ears and mouths and use this product," he added.

Largely this is bullshit. Close our eyes and ears indeed – it would be silly to take undue risks, even though this product is a decent one. But it does show that the RBI is keen to see market players participate. Volumes have been okay, though small compared to Nifty futures: 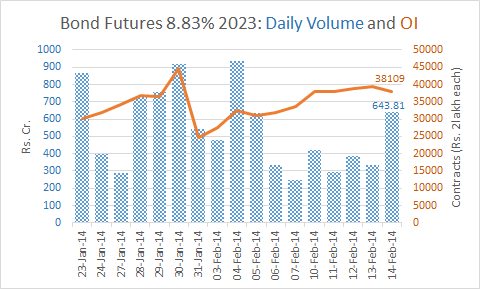 Banks are privy to much more information than the rest of us about rates and policy, so there is always going to be a fear of insider trading. Plus, the RBI is overzealous about market prices (look at the way they manipulate the dollar rupee situation). So it is very likely that if a bond price crashes near expiry, the RBI will randomly announce something (like an OMO) to support it, and thus screw up trading. (And the banks will know it before we do)

Having said that, I’ve been trying to trade this but the bid-ask spreads are so wide that it is irrelevant. Yesterday, the best buy was at 99.11 while the best sell was at 100.17. Who the heck wants that kind of a spread in bond futures, where the leverage is extreme (you need only 3% to 5% margin) and even a 10 paise spread means a fairly large percentage of your margin.

Let’s hope this gets better. RBI’s overbearing nature does not help, and neither do the wide spreads. And there is zero FII participation at the moment. The bright side? There’s a lot of scope to improve.