In the Monthly Bulletin for December 2013, the RBI has revealed it net-bought about $3.5 billion. These purchases are likely to have been in the beginning of the month, as indicated by the change in currency reserves: 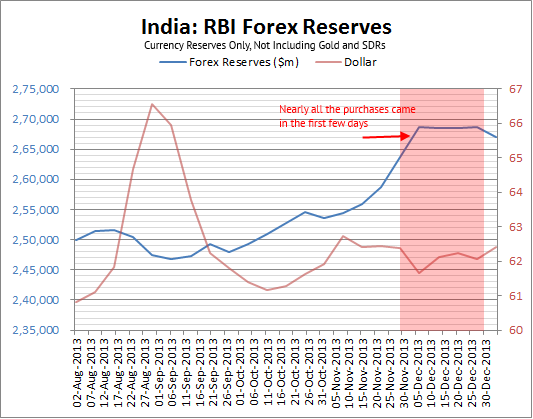 Remember that banks were allowed a couple days leeway after the FCNR swap expired on Nov 30, which accounts for the huge dollar buying figure in November (and the correspondingly large forex forward sale figure).

Forward contracts, though, came remained at a net sales exposure of $32.6 billion (which the RBI must repay). 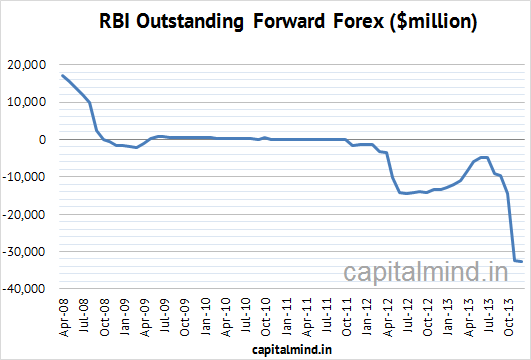 In December there was a fairly large inflow of FII money into Indian debt and the rupee remained stable. However, since then, debt inflows have reversed and FIIs have sold equity, and the dollar has remained stable: the data for Jan, which will be revealed next month, is likely to show RBI having sold dollars for stability.

RBI shouldn’t be allowed to do this kind of trading without any level of transparency other than a lagged piece of consolidated data after two months. In my view all dollar trading should be segregated into a different entity that must be funded and managed independently of the RBI. The RBI should only subscribe to bonds issued by that entity as a proxy for currency reserves. The RBI distorts the market by participating.