Let’s take a look at another outlier we’ve started to see: That FIIs can no longer invest easily in Indian debt markets, and this might be a big change for the rupee/dollar exchange rate.

RBI seems to be getting back into extreme micromanagement mode, with another sub-limit decrease on corporate bond investments. What they already have is a set of zany restrictions on what foreign institutions can buy, in terms of Indian corporate and government debt.

On top of that there used to be an auction mechanism. As an FII, You want to buy debt? You have to bid for the privilege and pay a fee to hold that limit, and compete with everyone else; and then if you bought some bonds and sold them, you couldn’t use the proceeds to buy more. You had to wait till the next auction, bid for your stuff etc.

Recently the auction mechanism has been disbanded as long as FIIs own less than 90% of the above mentioned limits. Above 90% the auction will have to happen.

So where are we? At this point, FIIs are close to their limits on short term government paper (T-Bills). While the limit we tell them is $5.5 billion, we translated that to the rupee amount at a conversion rate of less than Rs. 50, which means they can only buy Rs. 25,416 cr. worth of T-Bills, and that is only $4 billion nowadays. They’re at 95% of that limit: 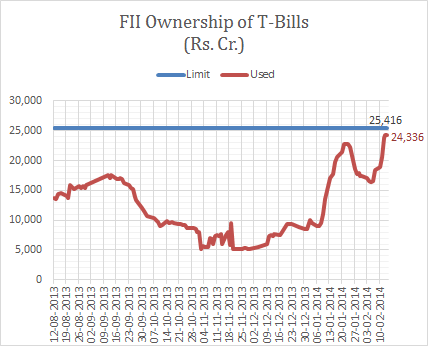 A new limit in Commercial Paper

Commercial Paper is short term debt issued by the private sector. Companies like PFC and Piramal Healthcare and all of them issue short term paper.

In Commercial Paper, FIIs have been buying substantial amounts, and because of that, the RBI has again reduced the limit from $3.5 billion (within the overall limit of $51 billion) to just $2 billion. Because of exchange rate differences the limit is down about 30% to 12, 455 cr. out of which FIIs have already bought 11,000 cr. (90%). 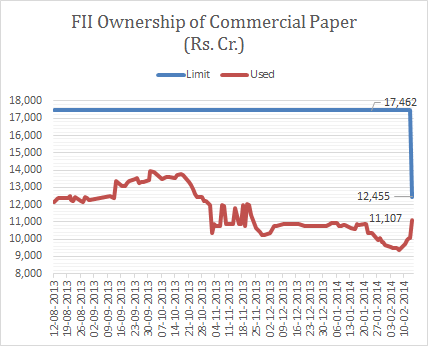 In the last few months, more than 60% of daily change in holdings is in short term paper (T-Bills or Commercial Paper).

In fact, FIIs have cut exposure to corporate longer term paper (now 68,500 cr. after being at 79,500 a year or so back) to increased exposure in short term paper. 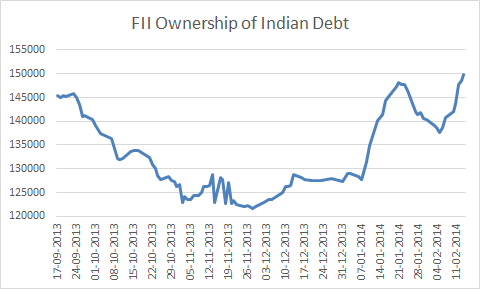 While this investment is still only 38% of the FII total investment limits of 398,000 cr. , the concern is that it is this high only because of short term debt, which for FIIs has reached its limits.

Impact on the dollar: FII flows since January are largely Debt

If you look at FII flows, they have mostly been in the debt markets since Jan 1, 2014. Equities have been negative. 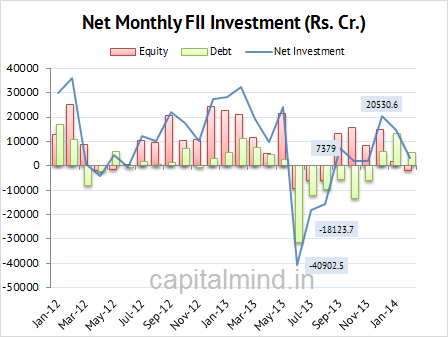 This fund flow has helped the USDINR which still trades around the Rs. 62 mark.

If FIIs won’t bother about debt anymore (since they are mostly interested in short term paper where they have reached their limit) then we are likely to see:

One possible trade here is to go short the rupee, but remember that the RBI is very active in the currency market and they can chop you off unless you’re reasonably capitalized.

Secondly, the short term yield curve is already under some stress (due to liquidity and solvency issues) – the curve could get inverted as short term yields rise; here, short term debt mutual funds will initially lose money. You could exit and get back in to make a small profit, but it’s better to start moving funds from other investments into short term instruments to get a substantially higher return.

Thirdly, the trade is to go long IT and Textile export stocks. A fall in the rupee only helps them.

We aren’t taking any of these as positions right now, and would like to see how markets react on Monday. The RBI announcement to cut CP debt limits came after markets closed.

Capital Mind Premium brings you outliers with the appropriate analysis you need to understand why this is an outlier. We hope you liked this one as much as we liked writing it!