Once the world’s largest Bitcoin exchange, Mt. Gox, has shut down after a massive theft of BitCoin due to a technical glitch. Bloomberg says more than $390 million worth BitCoin has been pilfered from the site.

This is what you now see on the once-famous BitCoin trading and wallet site: 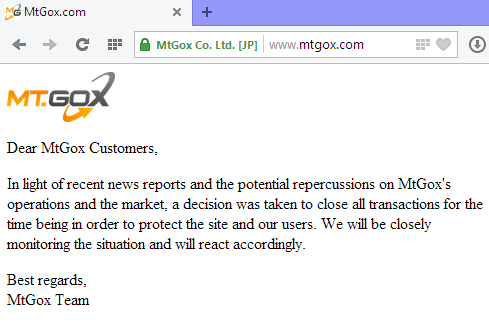 Mt. Gox is actually bankrupt, says Gox, in a document by Ryan Selkis (doc at Wired).

According to the document, the exchange is insolvent after losing 744,408 bitcoins — worth about $350 million at Monday’s trading prices. The plan paints a bleak picture of the exchange’s finances and outlines an arbitrage scheme to restore the exchange to solvency. “The reality is that Mt. Gox can go bankrupt at any moment, and certainly deserves to as a company,” the document states.

The problem started in a glitch in the software that allowed for hackers to exploit “transaction malleability” where a person could claim ownership by a complex technical method of replacing part of the transactional information in a bitcoin’s blockchain. (Here are more accurate details)

Since then, the exchange has imploded and things have gone out of control.

There are horror stories posted on reddit and there’s a guy who put all his life savings into BitCoin.

The Price fall isn’t so much that it is alarming, yet. All we have done is to go back to November 2013 levels!

Obviously the Mt. Gox story kills a lot of public enthusiasm for BitCoin. The remaining exchanges have put out a public release stating they will work to ensure the safety of all the coin in their control and that the Mt. Gox thing was a “bad actor”:

This tragic violation of the trust of users of Mt.Gox was the result of one company’s actions and does not reflect the resilience or value of bitcoin and the digital currency industry. There are hundreds of trustworthy and responsible companies involved in bitcoin. These companies will continue to build the future of money by making bitcoin more secure and easy to use for consumers and merchants.  As with any new industry, there are certain bad actors that need to be weeded out, and that is what we are seeing today.  Mtgox has confirmed its issues in private discussions with other members of the bitcoin community.

While the release will help, there need to be concrete actions like a backstop saying if you lose money there, we will collectively help you get money back or some such. BitCoin Insurance will be a good thing.

There are two, and only two, very large problems with BitCoin.

Regulators don’t like the anonymity of virtual currencies. They don’t like to know that you can hide who did a transaction. Bitcoin exchanges can’t state that they will allow complete anonymity, so they have to have an element of verification. Tax authorities don’t like it if you barter but don’t declare your transactions, especially if done in another country. Regulators like RBI in India don’t like forms of currency because they want to regulate every single bloody tiny thing ruthlessly.

Trust goes when people think someone else can steal your money. If Gold ETFs told you suddenly that your investments have been redeemed to someone else, or that they really don’t have that much gold in their warehouses, you will stop  buying gold ETFs immediately and no one else will either. If a bank told you someone stole money from them and you have to suffer, you will stop putting money into that bank, and withdraw what is left. People will not accept a currency they think is not safe, because they are basically taking the risk of not getting paid at all. When a currency loses trust, it’s sliding downwards.

These are not black swans. Black swans are unknown, unpredictable events. These are known, and known well enough to everyone. In that sense, they are white monster swans: swans that you are familiar with (white) but of a size you are not (monster).

While big investors and firms are still in the space and have addressed the technical concerns Mt. Gox has had, BitCoin is still in its infancy and more technical glitches and issues will come. How we will see these surmounted is what will contribute to its success or failure. Just because big names are involved doesn’t mean it will be a success.

On a personal note, I am considering taking the risk for Capital Mind Premium, anyhow. You might read this article and others I’ve written and think I’m negative. Oh no, I’m a skeptic not a doomsayer. The idea of being a skeptic is simply that: you question everything, and then you take your calculated risks. BitCoin may have monster challenges, but I think it has a great future as an investment (not necessarily as a universal currency).

If it can’t be stolen away.