This is an archived mail for Capital Mind Premium subscribers, sent on Feb 6, 2014. (Read more)

There’s been some interesting macro-data in the last few days, which seems to have gone largely unnoticed. At Capital Mind, we like to look at data but understand that by-and-large it’s only the outliers that are actionable. That means I could give you a very large amount of data to analyze but in the end, what is actually interesting is:

Different things are actionable for different people, but it’s always a little jigsaw puzzle you have to put together so that you see what’s really happening inside. Let’s take a look at the outlier in government debt – the big repayment – and how it impacts the longer term bonds.

In January, one of the government bond auctions of Rs. 15,000 cr. was deferred. This has now been cancelled, since the government has cash flow elements of:

Note that the government will pay out Rs. 20,000 cr. in debt repayments coming due in February.

We’ve also noted that more than 89,000 cr. of debt is coming due in April and May. To avoid the massive exposure – these would be the largest debt repayment months in a very long time – the RBI had decided to swap debt that would mature now for debt due later.

This was given a Rs. 50,000 cr. budget and the RBI has managed to roll Rs. 27,000 cr. of it to a longer term, in an announcement yesterday. But which debt? If we look at data on Jan 27 and then on Feb 3, we can see the differences and see where the debt was moved. 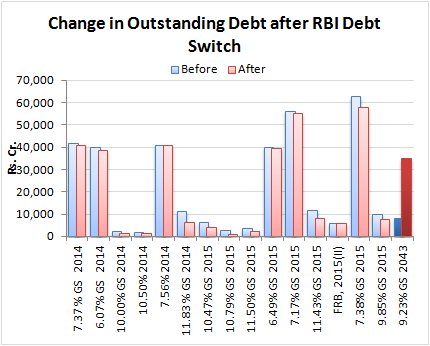 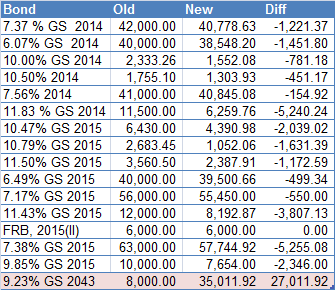 The impact is still huge for April and May, which, together, account for Rs. 85,000 cr. of debt repayment AFTER this debt switch. 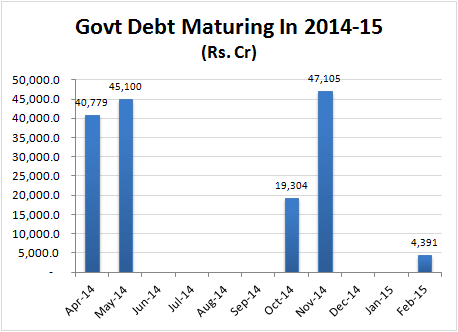 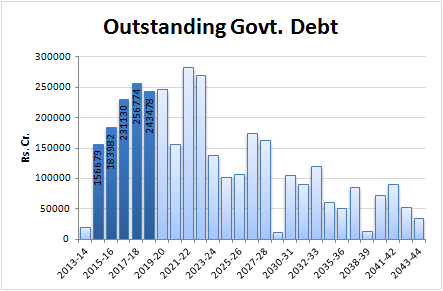 As you can see, the switch doesn’t change the repayment concentration in any substantial way.

Even if the RBI switched the rest of the allocation (Rs. 23,000 cr.) in the April+May months, we would see fairly high redemptions of 62,000 cr. in those months.

What do the above two pieces mean? They give you the outlier: the high repayment. The government doesn’t have this money. It will have to borrow to repay, and it will borrow through long term bonds. Issuance of these bonds will go up.

There will also be a new 10-year bond, which will mature in 2014, issued after April.

The trade idea therefore has to be that the 8.83% bond will see lower prices (and higher yields). We expect that prices will remain under pressure. In our view, a short trade can be entered after the inflation numbers are out in the middle of the month. Inflation is likely to be lower, so yields will fall on the hope that on April 1, RBI will cut rates (which we don’t believe is likely).

There is now an instrument you can use to make trade this – the 8.83% bond on the NSE Bond Futures segment. Liquidity, however, is low, and we might only want to enter the April or May futures (the May futures aren’t available till after Feb 26).

If you don’t really want to trade this but need to understand how it impacts you, it’s going to mean that your fixed income investments in longer term bonds will lose money. Bond funds that have a high “duration” – a parameter which intends to indicate how much time is left for their bond holdings to mature – will be hurt if they hold the 8.83% bond (and most do just for the liquidity).

We would avoid fixed income products that have a long duration, and work closely only with those that are very short term in nature, until there is more clarity on the above repayment, the political situation and of the exit of FIIs from the debt markets.

In another post, we’ll build a fixed income portfolio that will be updated every month, consisting of mutual funds. We will add to them a small number of fixed income bonds that trade on the stock exchanges, for smaller portfolios (since they are illiquid). And we’ll have some real money behind these suggestions.