For Capital Mind Premium subscribers only, sent on 24 Feb 2014.

This piece introduces Rohit Shenoy, who’ll talk to us today about the Quantitative Easing in the west, the scale of it and the impact of a reversal. Rohit runs a private investment firm in Bangalore, and is now an advisor to Capital Mind. He has in the past worked with large institutions such as GE Asset Management and ERC in America. 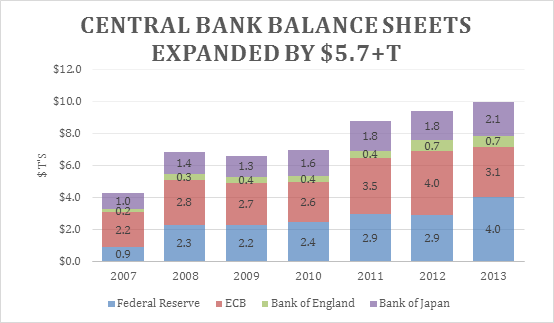 If the global crisis were to be portrayed as a family drama it might have gone something like this – son comes home after another night of partying and tells his parents he’s just run someone over while driving drunk.  The parents are horrified and cannot understand how letting their teenager take innumerable advances on his allowance for booze, a car he can’t afford and the odd drag of marijuana could have come to this.  It’s not like they were too irresponsible by letting the curfews slide and overlooking the many classes that he had to miss on account of a bad hangover.

More importantly, he should have known what was good for him, shouldn’t he?  Now he might be looking at jail time, which would rob him of a potentially bright future.  Yes, what he did is bad, unforgivable even. But if left to natural forces, this situation can destroy the entire family.

Dad is in two minds on what to do but admits something must be done.  Mom has already sprung into action calling every connected person she knows.  She’s the one with the checkbook, with the power to make this ghastly nightmare go away.  Her son just needs a good tongue lashing, some direction and it’ll all be fine again.  This is going to be money well spent even if she has to mortgage the house, sell her jewelry and tap into their retirement.  (End Scene)

As you might have guessed already our unshakable Central Bankers are playing “Mom.”

Armed with years of theory they set aside Hank Paulson’s bazooka and picked up a nuclear missile of quantitative easing, silencing the skeptics with their awesome arsenal.  Pretty soon liquidity was restored allowing companies to pay their employees and suppliers.  The markets stopped careening to the floor and started rising again.  Doomsday averted, they then moved to the next problem.

People were too scared to spend.  Job security was less than assured, the house wouldn’t fetch half what it was worth just last year and the same plight was reflected in their stock portfolios.  The rainy day had come.  Saving for the present trumped a future that was cloudy at best.  The irony of the situation however was that without demand that fear might become a self-fulfilling prophecy.

Central Bankers, already having taken a hammer to knock down rates to the lowest in 30 yrs hit up against another issue – the difficulty of taking rates below zero to spur demand.  In other words you’re more likely to spend if someone actually gives you money, freely, to spend.  In reality however, we know that is not going to work (believe me I’ve asked to be a test subject to further economic discovery and been rejected by many banks, the charlatans!).

So, Bernanke and company innovated with “unconventional methods.” By buying just about anything. The last 6 years have seen the fastest and the largest increases in central bank balance sheets – EVER.  They’re not just cheering from the sidelines, they’re charging the soccer fields.  Go ahead and spend!  Now is not the time to save.

To state the obvious, $5.7 trillion buys a lot, a helluva lot!  That’s almost 8% of global GDP.  You can buy Apple 12 times over or 7 trillion “meals” at your local south Indian eatery; which could feed all of the Indian population for over 8 years (2 meals a day, Rs. 50 per meal) It’s the equivalent of the fourth largest GDP in the world behind the US, China and Japan, and would almost equal the combined GDP of Germany and France … you get the picture.

Many have argued about the efficacy of these herculean steps.  For the record, lending is back, markets are up over 100% from their lows, long term bond rates in most developed markets are at the lowest ever, US unemployment is well off its lows and inflation is in check in all these economies.  Mission accomplished?

The US Federal Reserve, at least, believes that it might be time to take the foot off the accelerator.  Late last year they announced a scale back of their Quantitative Easing policy from $85B/month to $75B and further trimmed that to $65B this year. If the economy continues to rebound most believe they might altogether stop buying securities by the end of the year.

That would mean that one behemoth “consumer” would cease demand of certain securities by over $1T/yr. That does not mean that they will start selling what is on their sizable balance sheet but new purchases will be curtailed and likely will have to be picked up by others, assuming supply remains the same.

In Europe it’s a somewhat similar story in that banks have started to pay back the loans that the ECB had made.  ECB’s loan balance to EU banks has shrunk by over $500B in the last year alone as a result of repayments. However, the ECB continues to reiterate that the risks are to the downside and they remain ever ready to do “whatever is necessary.”

The emerging markets though are another story.  These countries were recipients, initially, of huge inflows in search of yield.  However, as Mckinsey’s analysis shows in the chart below, that largesse has reversed course for a variety of reasons chief among them being booming stock markets in the developed world.  It hasn’t helped as well that these nations have by many measures not delivered on the promised growth while continuing their addiction to debt and high deficits (refer to earlier article on Fragile Five). 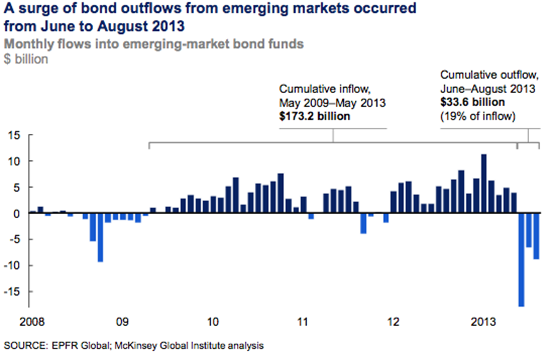 What might lie in store for the world as we move into this next stage of the grandest economic experiment of all time?  No one knows for sure (but bet that we’ll be coming to you with our views in future installments).  For now, these Central Bankers seem to be playing poker with great conviction in a theory.  Though one can’t help but be reminded of that Yogi Berra saying – ”In theory there is no difference between theory and practice.  In practice there is.”

Disclosure: The authors at Capital Mind have positions in the market and some of them may support or contradict the material give
n above, or may involve a direction derived from independent analysis.