A quick look at the recent GDP estimates in charts.

India’s GDP growth slowdown is evident in the fact that the GDP growth was just 4.5% in real terms in 2012-13. 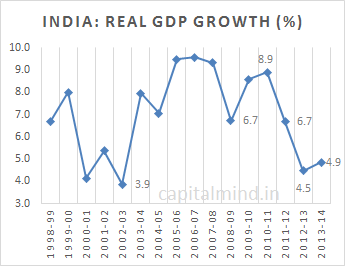 A Great Monsoon Helped But Manufacturing Went To The Toilet

You can’t ignore the change in GDP and the impact of the lack of any real reforms. With big agri subsidies (fertilizer, government buying at a loss from farmers, diesel subsidies, no taxes for farmers, free power by states) we have seen a 4.6% increase in real output.

(Nominal agriculture output went up a ludicrous 17.7% so we can see the massive inflationary impact there)

Manufacturing is at a negative 0.2% and Mining continues its bad run. Both are seeing the impact of very bad policy, both at the RBI and the Government levels. They do get subsidies but not at the same level as Agriculture.

Power (Electricity production, gas and water supply) is up 6% in real terms. 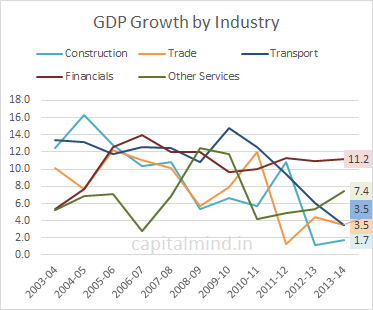 The slowdown is evident in the businesses of construction, Trade and Transport. Even transport (which includes communication) that was quite gung-ho before 2010 has fallen to 3.5%.

The outperformers are Financial and Personal Services, and the 11% and 7% numbers are after inflation! (Nominal growth in them was 18% and 16% respectively). Financials include real estate, banking and insurance, while other services include public administration, defence and private services (like haircuts).

By Industry India’s GDP has a fairly well balanced representation from all industries. 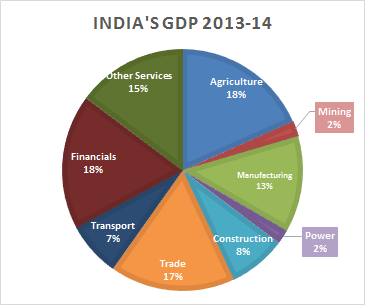 The difference between a “real” GDP and a nominal one is about removing price increases and plotting only the real increase. If we plotted what “deflates” GDP from nominal down to real, that difference is the impact of price increases. The GDP deflator is simply Nominal GDP divided by Real GDP, and here’s the plot of the increase in this deflator year on year. 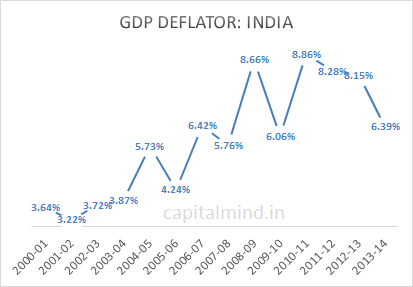 Contributions: Financials, Personal Services and Agriculture Do The Trick

The biggest contributions to GDP has been, undoubtedly, financials. This is the growth in each component as contribution to the overall GDP growth. 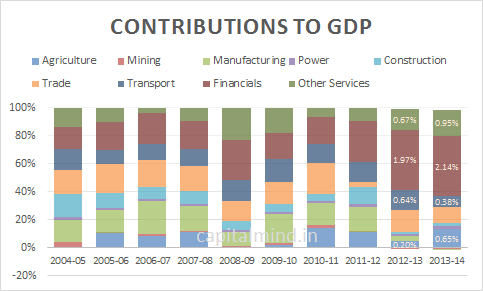 Conspicuous by its absence is Manufacturing in the last two years.

In Capital Mind Premium, a lot of these graphs will be available as part of our proprietary data product, complete with interactivity and visualizations and regularly updated data, coming to you this quarter.