The Index of Industrial Production (IIP) for December 2013 came in at -0.6%, which is lousy. Media sources keep telling you they “beat expectations” and all that, but expectations are just that: figures someone pulled out of a hat, and they are VERY unlikely to get it right consistently (and no one has). 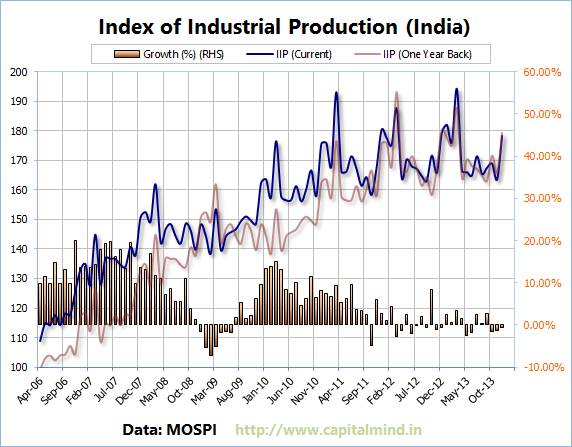 IIP growth rates have been terribly bad in the last two years.

A quick look at the components gives an idea of where we are concentrated. Most of the weight in the IIP is in manufacturing. (75%) 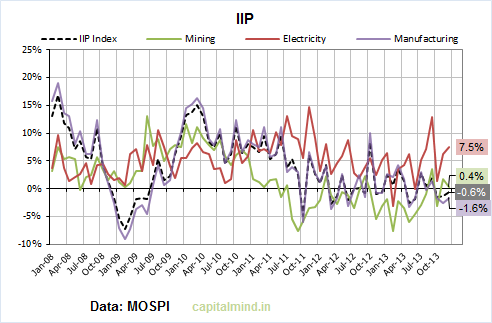 While Mining had stayed in positive territory, it was the move in manufacturing to “only” -1.6% that saved the day. Electricity production has been going up till December.

On a use-basis, we seem to have seen a rebound in Basic and intermediate goods, but Consumer goods continue to disappoint. 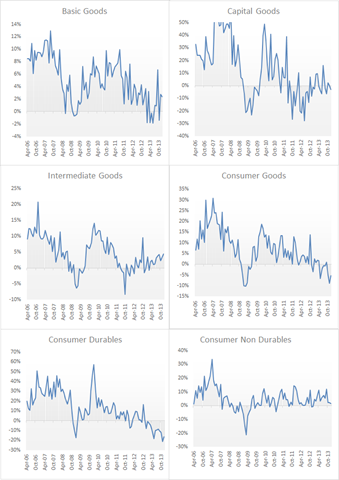 Impact: I don’t think this is a sign we’re getting better just yet. Growth is definitely slowing and combined with relatively high inflation (8.8% on consumer prices) we are seeing sustained stagflation in India.

At this point, any stimulus will only increase inflation, not actual production. To increase production, we’ll need to wait until inflation is truly well below the point that we get jittery – and I think that point is about 5% to 6% right now. Manufacturing growth however can come in faster through labour reform, removal of subsidies to competing investments (like real estate) and in a system of GST and lower direct taxes. A new government might help.