To avoid the large amount of soiled notes and the ability to counterfeit notes printed long back, the RBI has requested that you exchange all noted printed before 2005.

In their press release:

The Reserve Bank of India has today advised that after March 31, 2014, it will completely withdraw from circulation all banknotes issued prior to 2005. From April 1, 2014, the public will be required to approach banks for exchanging these notes. Banks will provide exchange facility for these notes until further communication. The Reserve Bank further stated that public can easily identify the notes to be withdrawn as the notes issued before 2005 do not have on them the year of printing on the reverse side. (Please see illustration below)

The Reserve Bank has appealed to the public not to panic. They are requested to actively co-operate in the withdrawal process.

How Do You Identify If Your Note Needs To Be Changed?

Look at the back of the note. At the bottom, if it has the year printed, it’s a post-2005 note. (Earlier printed notes didn’t have the year on them) 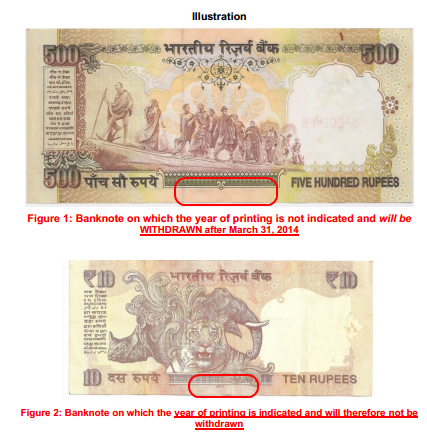 Whoa! Will The Bank Ask For My Pan Number And All?

Firstly, note that this is not a campaign to see who has how many currency notes. So they don’t really care who you are, initially. That means from now to July 1, you can exchange any number of notes with a bank, without any fear.

There is a rule that transactions above Rs. 50,000 need a PAN verification, but we aren’t yet sure if that applies to the changing of notes.

And you don’t have to go to your bank. You can go to any bank, and they will change your notes, for free.

Also note: After July 1, banks can ask for a proof of identity and residence if you want to exchange more than 10 notes. An aadhaar card should work for both cases. You aren’t required to give a PAN card.

Will This Unearth Black Money?

It is not designed to, but it could create a layer of panic as a side-effect!

Now black money is largely money in cash. This cash is typically in the cash economy; shopkeepers earn cash, real estate sellers take part of their money in cash, and so on.

Firstly, do you HAVE to change the notes? No. The notes will continue to be legal tender, and both banks and shops will have to accept them.

But you can bet that when RBI advertises this, everyone will start to think that notes without the year printed on the back are fake. That will force most people to actually change these notes. In a way, this will cause a layer of panic.

Many of the notes used are pre-2005. People who have large amounts of black money – in crores of rupees – have these notes in copious quantities. They will, right now, have to frantically search through those notes to identify pre-2005 notes. And then, they’ll have to take those notes to banks to exchange them.

People with a lot of notes will have to change them. But the RBI circular says that anyone can go to any bank to change notes, and you don’t need to give any proof of identity before July 1. To most people with a limited number of notes, this is not a problem.

Those with large amounts of currency notes might not want to go to banks for fear of outing themselves – remember, at least the bank personnel will know someone has a lot of money in cash, and even bank employees are human and can leak this information to thieves and burglars.

What Will The Black Moneyed Do?

In all probability they will attempt to convert the black money into dollars, gold or anything other than rupee notes. This will cause some churn and could, in effect, bring some of the black money back into circulation.

The other thing is that they could try and palm it off in larger amounts by purchasing real estate.

But Most Black Money Has Been Laundered

Most of the biggest chunks of black money have already been converted to “white”. How? Simple – you do the hawala to convert to dollars and send the money out of the country. Then through a web of companies in Dubai, Switzerland and Mauritius, the money comes back into India as “equity” or “convertible debt” into an Indian company, which is soon written off. Or it is brought in as tax-free imports in an SEZ against software that doesn’t exist. No taxes paid, and the money is clean.

So no, this scheme will not unearth BIG black money. It will remove only some elements of black money, and even those people will have figured out how to replace those notes over the next five months without needing identity proof. Only a small number will panic and be inconvenienced, as will be those that have clean money in currency notes (the poor, the villagers who don’t trust banks etc.).

The biggest problem of such a scheme is the fact that the bureaucracy, the politicians and the judiciary – who are some of the biggest owners of black money – will hate it and try to stymie it. There will be a legal battle which could result in a stay order. There could be arguments like this is anti-poor (it is, because the poor won’t even know how to deal with the problem) which could cause the RBI to change their timelines dramatically.

RBI may not have enough new notes printed in time, and a shortage can cause people to panic. The lack of knowledge in bank officials could also create problems, such as asking for a PAN card (where none is required).

The circular doesn’t mention if transactions above Rs. 50,000 will need a PAN which is a universal law. That alone can cause a lot of confusion.

How Much Pre-2005 Currency Notes Are There?

Here’s the “Notes in Circulation” from the RBI data: 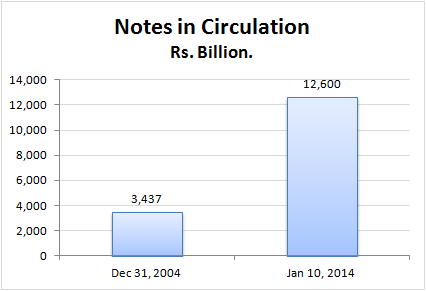 This means about 3.4 trillion (343,700 crores) is “suspect”. Around half of this would have been churned back over the years, replaced normally. So in effect, this affects notes worth about 200,000 cr. (2 trillion) which is a fairly large chunk of money. The RBI needs to be prepared to replace that much.

Currently my thoughts: Don’t panic. Change those notes if you have any. I have some 10 rupee notes that don’t have the year printed but then I don’t have any black money. If you have black money I have no sympathy for you, and I don’t really care if you lose it. Pay taxes on it and put it in your bank account. But this mechanism will not hurt those who have black money in any serious way; just the marginal folks.