This is a guest post by Rohit Shenoy, who runs a private investment firm in Bangalore. He has in the past worked with large fund management firms such as GE Capital and ERC in America. Disclosure: we’re related, and I’m trying to convince him to come on board at Capital Mind!

Ever heard of the “Fragile Five?” Stop! Don’t go through your teens itunes or CD collection to find out who they are. Instead if you’re thinking that it’s time for a new, “make it catchy” phrase to describe some emerging market nations and all the good ones are taken, you’d be absolutely right. The “Fragile five” is a new term coined by Morgan Stanley to describe the economic state of India, Brazil, Indonesia, Turkey and South Africa. As you can tell by the introduction, I hate it!

Morgan’s contention is simple – all these countries, in recent years, have experienced slowing growth, increasing current account deficits, rising inflation and can be impacted by the changing global dynamics of the US taper as well as a slowing China. Add to this upcoming elections, stir properly and you get … “Fragile Five.” Well, they have a point about the whole economic situation but let that not distract you from the horrendous name.

The aftermath of the credit crisis seems to have really sapped the mojo of these once rising stars. Structural issues worsened by political mismanagement have given rise to higher and higher inflation.

As developed economies target 2% inflation levels, these countries are battling readings many times that number. India, in particular, has the biggest inflation problem of all, while Indonesia’s numbers have climbed high in recent years.

(Note: Recent is only the last quarter ended September,  before that it was as bad as 5.5% of GDP)

The degradation in purchasing power from inflation is further worsened when you’re a net importer of goods and services. Rising fuel bills, increased domestic appetite and weakening competitive positions have worsened the current account deficits in all these nations. No matter of short-term trade restrictions on gold or marginal cuts in subsidies will make up for the fact that other countries make goods cheaper, better and are more innovative. In the end that’s what it comes down to – how competitive is a nation in the worlds market?

Change in Currency Rates to USD 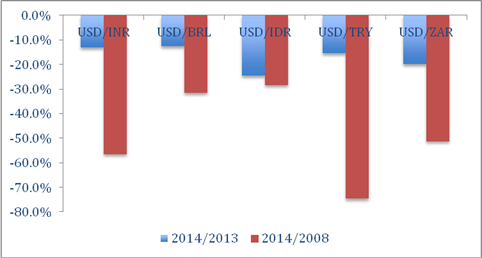 Source: OANDA.com (Year on Year changes as of Jan 1)

The sum of these problems has already had a crushing effect on the currency of each nation. Indian rupee is down over 50% from 2008 and nearly 13% in the last year alone. Should these imbalances go unchecked and tough decisions on subsidies, rates and structural reforms be side tracked for populist or short term measures we could very well be in the early stages of another Asian crisis. Better to hold onto some dollars as we ride into elections and await the outcome.