In the first 15 days of January, Foreign investors have invested over $2 billion in debt, with over 13,000 cr. of debt being purchased. 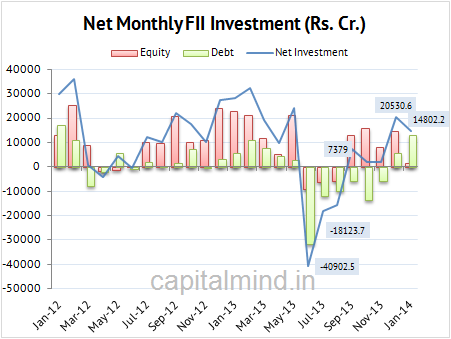 This is the highest single monthly number in two years, and remember, the green bars show you how bad the last few months have been. Since July 2013, when the news of the taper first came about, foreign investors sold 78,000 cr. of debt till November. December saw about Rs. 5,700 cr. of buying and then this month, Rs. 13,200 cr.

The enthusiasm for Indian debt might not be related to India itself. Emerging market and debt of the PIIGS countries (Portugal, Ireland, Italy, Greece, Spain) have seen huge buying interest. The ECB might reduce capital requirements from 8% to 6% for the next round of stress tests, and may not require sovereign debt to be marked to market, easing pressures on the worst banks in the region. Portuguese bonds are at three year lows on yields (which means high prices), and Spanish bonds are close to five year lows.

Locally, Indian fiscal deficit fears have been assuaged somewhat, with the government appearing to shore up its finances through large dividends like with Coal India, and cancelling a 15,000 cr. auction scheduled for tomorrow. 10 year bond yields are at 8.61%, the lowest in a long time, having been at 8.8% a week back.

But the risk is that the US taper is not fully understood yet. With $10 billion per month and a likely increase in the taper position to a point where the Fed may no longer be buying US securities every month by the end of 2014, the worldwide system is due to lose around $1 trillion in additional liquidity (though most of it, it must be said, was ploughed back to the fed as reserves).

India is a tiny country with respect to debt purchases, and FIIs are limited to around $30 billion of holdings in Indian government bonds. They currently own just about 47% of this limit, with only 72,000 cr. invested against a limit of 153,000 cr. That leaves them with about $13 billion if they want to invest. And in corporate debt, FIIs can buy upto $51 billion, of which they only hold 28%, which leaves them with $35 billion head-room. This is a lot of money, but it really pales in comparison with the US Fed buying of US securities of $75 billion per month.

By the end of the year, the impact of the taper should be visible in foreign investor inflows and while FIIs are starting to buy back what they had sold in a hurry, it’s very likely we see another outflow on the fear of, this time, the REAL US Taper.