Wholesale Price Inflation for November 2013 was a fourteen month high of 7.52%, the highest since September 2012. 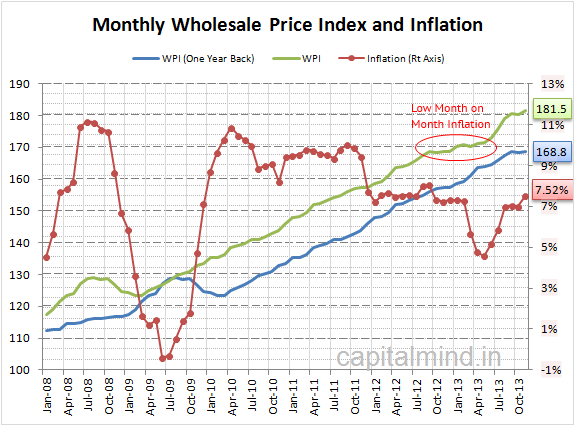 Since Inflation is looked at on a Year-on-Year Basis, we look back at how the data looked a year back. The Index flattened out in the months of October 2012 to Jan 2013, and didnt begin to rise until after May 2013.

And if you look at the green line towards the end, that is starting to show an upslope again (after a couple of months of flattening out).

This could spell trouble for inflation headline numbers going forward, if we continue to see prices go up while last year’s numbers were flattening out.

A quick look at components 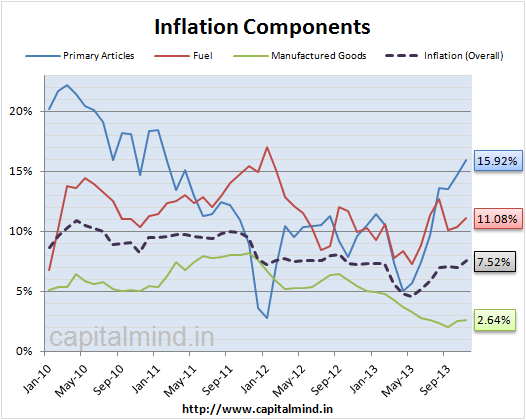 Fuel prices are up over 11% as well, largely on the move in diesel.

Manufactured goods are showing a marginal uptick to 2.64%. I don’t trust this data much as it leaves a lot of items un-updated for a long time.

Revisions – Couldn’t Save 7% in Sep

This has now been revised to 7.05%. The trend of big revisions has resumed, it seems. 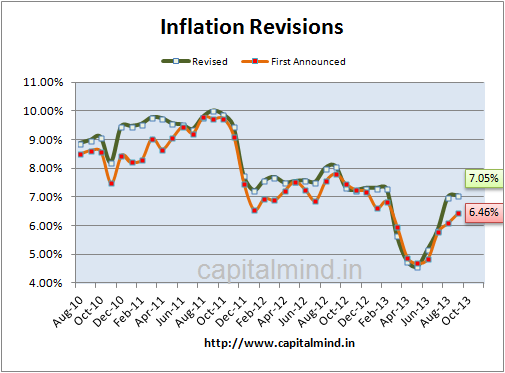 With CPI Inflation at 11.24%, and WPI Inflation rising, the first response would be an interest rate hike. There is no issue with liquidity. With a 48,000 crore 14-day term repo last week at 8.01%, there was nearly no MSF borrowing over the weekend. Banks are flush with cash.

Thus, an interest rate hike would make a lot of sense now, with the RBI meet on the 18th. But not the tiny 0.25% that they usually do. However, food prices have gone down, and it’s likely next month’s numbers aren’t quite as bad, and the IIP numbers show growth at -1.8% which is horrendous.

It’s going to be a fight, but we have to wait to hear what Dr. Rajan will say – but it would be very worrying if he did not make money more expensive, in my opinion.

Opinion aside, I see this number as a pointer that there will be a rate hike. Probably a very moderate one (0.25% taking the repo number to 8%) which will just be doing something for the sake of saying that one has done something. Such a small increase won’t hurt banks, and won’t help inflation, and isn’t a big impact.