We keep talking about our “Forex Reserves” and worry if they fall from $300 billion to $290 billion, as if some politician just enriched their pockets by taking that much money out of somewhere in the trenches. But reserves need more explanation.

The dollars that you have in your cupboard from that US visit in 2009 is not part of the reserves I speak of. It is also not a total of all the dollars brought in by importers. Forex dealers own “inventory” of dollars, which again are not counted. What “reserves” include is only what is owned by the RBI.

RBI owns foreign exchanges reserves, mostly in dollars. These dollars are usually short term US securities (like T-Bills), but will also include other currencies like Euros, Yen etc. Some of the other reserve elements are gold (which RBI owns), Special Drawing Rights (SDRs) and a Reserve Tranch Position of the IMF. The last two are fairly small. Here’s how the reserves look since 2001: 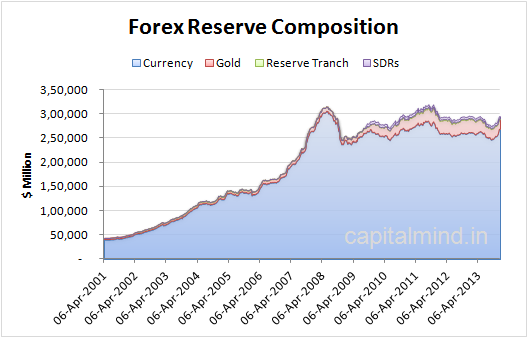 How does the RBI acquire dollars?

There is a foreign exchange market which is “over the counter”. A foreign investor wishing to buy Indian stocks will have to pay for them in rupees. The investors goes to a bank and says I have X dollars, give me rupees. Now the bank may offer the rupees, but it wants to sell the dollars to someone else.

If there is no one else willing to buy dollars from too many foreign investors coming in, the demand for rupees is higher than the demand for dollars. In isolation, this would mean people would give less rupees per dollar, and the rupee-dollar equation could fall seriously.

The fall in the exchange rate has scared the central bankers because it doesn’t help “price stability”, a stated goal. To avoid the rupee exchange rate falling, the RBI buys dollars from banks and prints rupees to offset.

The RBI Balance Sheet and Inflation

The extra rupees comes into the system, and the RBI’s balance sheet looks like:

This is why, on your 100 rupee notes, you see a “I promise to pay the bearer a sum of one hundred rupees” by the RBI governor. Because it’s a liability of the RBI.

Now in general, why would we do this? Why would we print money to stabilize the exchange rate? Wouldn’t it introduce inflation?

Answer: of course it will! More rupees in the system will result in more rupees chasing the same products. (Unless we use the excess rupees to create that many more extra products to offset). Our “real” growth – that is, an increase in the total things that money can chase – has been about 8%. However, the amount of money we printed has been as much as 16%!

(Some of it was printed to buy dollars, some to buy Indian government bonds)

The problem is that inflation has a lag effect. What was printed in 2007 will result in inflation a few years later, especially as savings rates come down. (When you save less, you spend more, and that money actually chases those goods and inflates their prices)

Why do we bother about reserves?

Many people think it is to cover against imports. Others think it is to satisfy foreign investors. After the Asian Crisis of the 90s, the thinking has been that developing nations need to build forex reserves to protect against devaluation. There is a fear that “speculators” come with lots of money and manipulate the forex market. And then there’s the whole currency volatility issue mentioned above.

The rupee isn’t fully convertible. That is, other countries can’t hold Indian rupees in their “reserves”. One of the reasons why need reserves is that other people can’t take rupees for what we buy from them.

All of these contribute to the building up of reserves.

In 1992, India went through a massive crisis that saw currency reserves fall to as little as 15 days of imports. At the time, there was NO convertibility at all. Foreign investors were not even allowed in most cases. And to be honest, Indian investors weren’t exactly invited either. We were a closed economy,needing licences for everything. Reserves therefore are looked as as sacrosanct.

They haven’t really helped. While the RBI has bought dollars to protect the rupee from gaining value (gaining means lesser rupees to buy dollars) it has not been able to do it the other way around when the rupee lost value. In 2013, the rupee lost 10% and the RBI refused to sell dollars from its precious reserves.

The fear of “losing reserves” has prompted them to not sell dollars. Also they wanted the market to play out. Which means price stability only works in one direction: to not let the rupee rise.

Do we need forex reserves?

My opinion: not this much. We can do with half this amount, or even lesser.

We could make the rupee convertible, of course. We just don’t want to because intelligent people with white beards tell us that if we did that a great calamity would strike the nation and we happily believe them. But if we think through this, we can free our currency and let others own it, and allow them the complete freedom to sell it where they want, when they want.

Foreigners won’t just hold rupees, they’ll want to get Indian interest rates on the rupees they hold. So they should be allowed to freely hold Indian rupee bonds (there are tiny limits like $20 billion or such, at this point, for certain bonds).

If we did this, we wouldn’t need that much import cover. If you need to import, you can pay in rupees instead. If you need dollars you go to the market and pay market prices – someone will exist that holds dollars and wants rupees. (If not, you’ll have to pay more. And there are enough buyers or sellers at some price, we’ve seen this playing out).

RBI owning reserves introduces another element: market manipulation. RBI cannot buy government bonds without informing the market days in advance. It tells players how much it will buy, and has an auction inviting offers from banks and dealers. But it does no such thing for forex. It will directly buy or sell, and thus manipulate the market because it can print rupees whenever it wants or use its massive hoard. This is evil, because a market player being a market regulator is frightening as much as it may enrich a few people in the know. (Even if reserves are to be held, they should purchase dollars in auctions, with amounts known in advance)

The RBI should then pare its reserves down and hold mostly Indian government securities for its balance sheet. The only thing that should dictate printing money should be  Let the exchange rate be volatile, it doesn’t matter. The using of reserves has done NOTHING to protect us from volatility (the USDINR rate has fallen 50% in two years!) and it has brought us structural inflation that we just cannot deal with.

Luckily the RBI governor has mentioned we need to do some of this. That the rupee needs to be more involved in global trade, and foreigners need more access to our economy. Let’s hope, as we must, that things will change for the better.