You thought inflation was high? It might get higher.

The government plans to buy a heck of a lot more cereals, wheat and rice, and store them and let them rot. This reduces what you and I can buy from the market, which will obviously push prices higher.

To ward off any grain shortage once all states start implementing the ambitious food security law, the central government plans to increase the buffer stocking and strategic reserve limits of Food Corporation of India (FCI) for both wheat and rice.

According to a senior government official, the Cabinet is likely to take up a proposal on the matter this week. The move could push up the requirement by at least 50 per cent from the current norm. Of course, it won’t matter right now, because we are already at least 40% above the revised limits. Current stocks are 66 million tonnes, which is 50% more than even the revised buffer stock limit (of 44 million tonnes).

The Insanity of Rice

India currently produces about 100 million tonnes of rice, which is 22.5% of global production. (Yes, we’re big on rice!) Of that the government procures 40 million tonnes! And stores in in massive godowns. 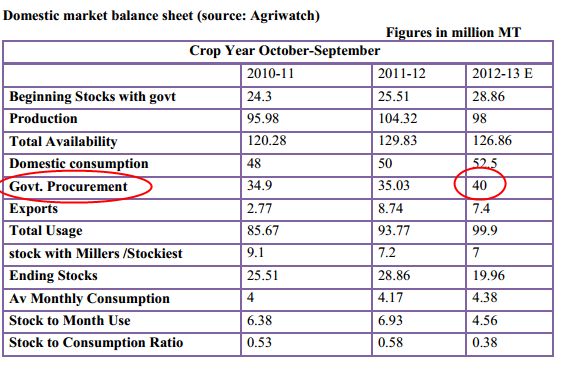 Demand, as you can see, is only 52.5 million tons, and we should have been huge exporters, of about 40%+ of our production (40 milion tonnes). But because our government buys and stores rice in godowns, we export just 7.4 million tonnes!

So if we were to increase buffer stocks by 50%, the government will want to buy 6 to 10 million tons more of rice more per year, which then begins to cut into India’s domestic consumption.

By the way, the above “Ending Stocks” level is not including something called “unmilled paddy” because they are trying to fool us. Unmilled paddy is what you will get rice from. And we have a ludicrous 21 million tons of it! Unmilled paddy was reported separately starting September 2013 – and this is a big scam, because we have been adding to unmilled paddy substantially (from 9m tons in Sep 2013 to 21m tons in Dec 2013) while reducing rice stocks. This allows the reporting of rice + wheat stock (the official stock quantity) to look smaller than it is!