Rahul Bhatia has a fantastic post on Network 18, over at the Caravan.

“From a finance perspective, it’s a company built to pull wool over shareholders’ eyes,” Deepak Shenoy, who runs the financial website Capital Mind, told me on a phone call from Bangalore. Shenoy posts regular dissections of company finances on Capital Mind, and has kept a running tab on Network18’s numbers, which he says indicate that it’s a company that “keeps hiding stuff under the carpet”.

In 2011, he discovered a befuddling note in the company’s annual report. Network18’s management took a Rs. 255-crore loan, but the money wasn’t for the company. It was for a confusingly named trust called ‘Network18 Group Senior Professional Welfare Trust’, over which Bahl, his wife, and his sister, Vandana Malik, exercised significant influence. The trust was provided this money even though Network18’s management knew it was unlikely that any “economic benefit will flow to the company from the trust,” according to the Network18 company’s 2011 annual report. The report also showed that the trust repaid Rs. 202 crore to Network18 that year, but still owed it nearly Rs. 150 crore. “Why the heck should a company give Rs. 255 crore of its own investments, as security against a loan to a promoter entity?” Shenoy asked. He observed that the trust controlled by the Bahls had used loans to purchase shares directly from the market in September and October 2011. “Effectively, the company’s money was used to help the promoters buy more shares from someone else,” Shenoy wrote. “This is brazen. I don’t know if it’s illegal, but it sure as hell should be.”

Note: It’s actually much worse now. The total amount due by the trust to Network 18 is a whopping 555 crores! 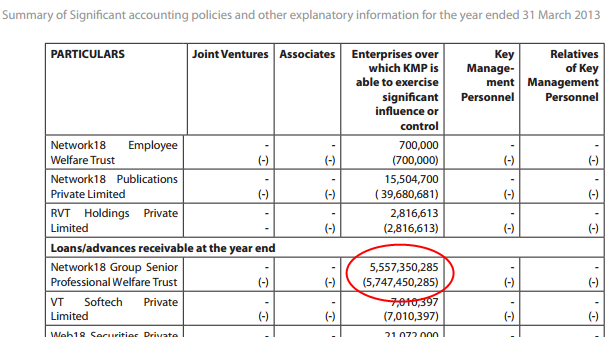 There is almost no chance that the trust can repay this amount. It owns 1.5 crore shares of Network 18, which is worth only Rs. 50 cr. at the current price of Rs. 31. (It could have other assets, but since it used the loaned money to buy shares that have now fallen in value…)

Strangely, the company considers this loan “good”; it lists Rs. 639 cr. as loans to “related parties” in page 89 of its balance sheet, and presumably this 555 cr. loan is part of that amount.

Network18 sold it’s stake in IFC to Roptonal (which is part owned by Network18 itself). But there’s another twist.

But Roptonal also demanded, and received assurance, that Network18 would pay up if Network18 Holdings could not. Roptonal expected to earn Rs. 322 crore over a four-year period that ends next year. Network18 has not explained why its Cayman subsidiary cannot make the payment, and has made a provision of Rs. 237 crore to bridge the shortfall (a figure which would have constituted 80 percent of its revenues last year).

This is not going to be fun.