Chinese 7-day repo rates have hit 8.8% and this has spooked regulators, so much that they’ve asked the media to reduce their focus on the issue. China has been trying to tighten for the last few weeks, and rates have been spikey.  From @Schuldensuehner: 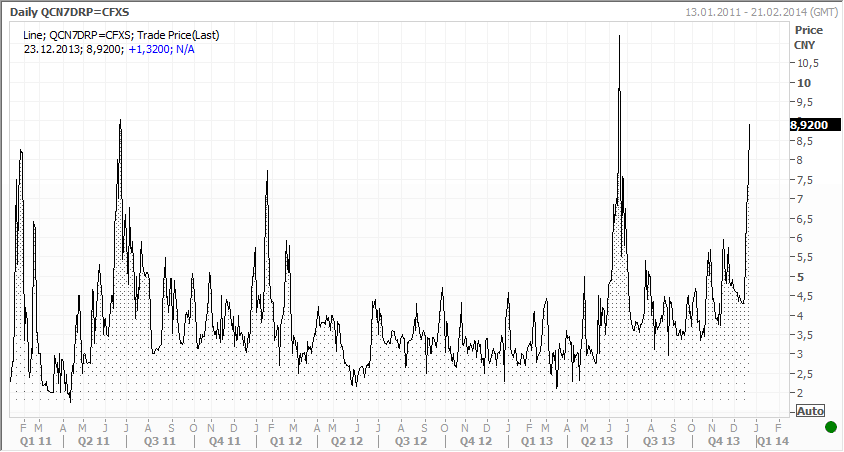 After the last spike the PBOC (the Chinese Central Bank) injected over $49 billion (300 billion yuan) to control the rising rates. The reason it has stepped off the pedal is rising debt levels.

Debt in China has risen from 130 per cent of gross domestic product five years ago to about 200 per cent today, a steep increase that the government is now seeking to halt.

There are companies and people pulling out money at this time. Some, even for potential IPO rallies next year:

Mr. Deng said many investors are starting to build funds for initial public offerings, which will likely resume early next year following a year-long halt. “Usually new shares can rise at least 20% on the first day of trading. That’s another (piece of) bad news for existing stocks,” he said.

Curtailing liquidity is a good way to control an overheating economy. The question is: how bad is the situation in China?

Stock market crashes are usually during periods of extremely tight liquidity. In India, we saw it in July/August this year, in 2008 October (Lehman), 2008 January (Money squeeze due to investment in Reliance Power IPO and others), 2006 April (Reliance Petroleum IPO) when markets fell 20% or more. Rate hikes are therefore viewed with fear.

Let’s hope this doesn’t get complicated. Indian overnight rates are at 8.8% (but then they’ve been at these levels for a while). The 10 year bond though saw a rise in yield, from 8.75% to about 8.82%. We don’t have a liquidity problem by any definition, but that can change fast if markets move.